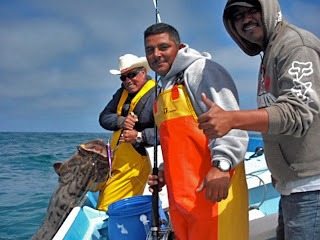 Hook and line seemed to offer a viable alternative to gillnetting with the potential result of eliminating the turtle by-catch entirely.
Several years ago I wrote about my friend, Hoyt Peckham, PhD and Director of International Relations for the La Paz –based Grupo Tortuguero de Las Californias, AC. Hoyt and his energetic and ambitious team of ten or so full-time year-round and seasonal staff plus a dozen or so interns (students from Latin America), have been seeking ways to improve the efficiency and reduce the by-catch of gillnets.

A recent email from Hoyt contained some exciting news. “Not sure you’ve heard about our initiative to train, equip and finance commercial fishermen from the local gillnet fleet to try hook-and-line fishing? The plan is to get them up to speed, cover their initial costs, and generate enough volume to attract some of the various buyers interested in exporting hook-and-line, fresh caught grouper and sand bass,” he wrote.

Proyecto Caguama was initiated in 2004 to engage local fishermen in mitigating and eliminating their by-catch. Through workshops conducted each fishing season, fishermen proposed modifications to their traditional gillnet techniques that could maintain or increase the profitability of the commercially viable target species while reducing or eliminating loggerhead by-catch.

Between the years of 2004 and 2008, controlled experiments to test the variety of modifications were explored, and while offering some encouragement, they were not enough to decrease the current by-catch of the 700 to 800 turtles significantly. The conclusion was that encouraging different net techniques which failed to reduce the by-catch kill-rate dramatically would be foolish.

The group’s focus then turned to ways of finding methods which would increase value-to-catch ratio…simply stated, earning more money with fewer fish.

For five seasons, participatory research, funded in part by NFWF, was conducted under the leadership of local fishermen. Hook-and-line seemed to offer a viable alternative to gillnetting with the potential result of eliminating the turtle by-catch entirely.

During the summer of 2009, seed funding was acquired to equip three crews with gear for bottom trolling and jigging. They received two weeks of onboard training from master hook fishermen. Onboard observations of 35 hook and 29 gillnet trips were conducted to record the results. Both methods were fished primarily over rocky bottoms for grouper. Catch rate and value-per-trip results were hook-catch by species (grouper) 79% ,while gillnet-catch composition was much less selective at 13% (also grouper).

Semi-structured interviews with local grouper fishing captains suggested that 58% would be willing to switch to hook-fishing under current market and fishery conditions. The principal concern of all fishermen regarding switching was the viability of a preferential market for hook-caught fish.

The most encouraging result was that switching the fleet from gillnet to hook-fishing could result in the sparing of hundreds of loggerheads per year because hook-fishing catches zero turtles. In addition to sparing turtles, hook-and-line fishing is also far more selective of target fish, therefore resulting in substantially lower numbers of by-catch, which in turn encourages greater sustainability of fisheries and ecosystems.

During the past year, Hoyt and his team devoted much of their time painstakingly working with the majority of local fishing co-ops. After numerous trips to Mexico City and Mazatlan, plus a well-attended ‘first of its kind’ Inter Institutional meeting in Lopez Mateos, PROFEPA, SEMARNAT, SAGARPA, CONAPESCA, SEPESCA, CONANP, and CRIP agreed to endorse the experimental initiative.

Demonstrating the government’s support of this project, the local Presidente Municipal recently confirmed the program was permitted by all relevant agencies for the benefit of the commercial fishermen of the area. He also commented that the program was an unusual opportunity for the gillnetters to be compensated for learning new techniques and opening a new market. Wholesale fish buyers from the United States have indicated that there is a strong demand for and clear added-value to be had with hook-caught fish.

Armed with the funding and science, along with the acceptance of many gillnetters willing to make the switch to hook-and-line fishing, Hoyt and his team are moving forward to implement the program.

Its ultimate success will be the introduction of a fishing method that is more selective and more profitable, while reducing turtle mortality dramatically. This is a lofty goal and I am sure that there will be a few bumps along the way. However, Hoyt Peckham and his Grupo Tortuguero team have demonstrated remarkable success in the past and many of us in Baja will be following the progress of this ambitious program with intense interest.
Posted by That Baja Guy at 3:41 PM