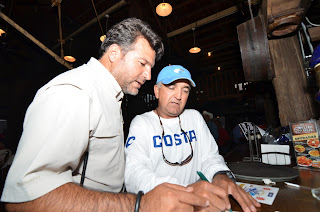 Pedro and Julio Meza, on the left organize a series of tournaments throughout the Baja Peninsula, Baja Norte and Baja Sur.

Pedro Sors, a dedicated sportfisherman, is the host and producer of one of the most popular Mexican television sportfishing shows called Con Caña y Carrete.  He and Julio Meza, a San Quintin produce grower and owner of FISHCO.com organize a series of tournaments throughout the Baja Peninsula, Baja Norte and Baja Sur.  These tournaments include the Governor's Cup series which feature a three-venue contest that was held this year in San Felipe, San Quintin and Ensenada.

Recently, I had the opportunity to meet Pedro and Meza at a Governor's Cup in San Quintin.  Aboard Julio's center console Contender name "Blessed" speeding out the inner bay with Julio at the helm, they explained the details of the Governor's Cup series.

The one day tournaments, which are open to anyone, offer prizes of cash and equipment for the largest fish in both surface and bottom categories for men, women and children divisions. In addition, anglers accumulate points at each of the three events that are totaled to determine the combined overall champions for the series. Each event is featured on the Con Caña y Carrete television program.

The series was first conceived during the term of Baja Sur’s  El Gobernador Narciso Agúndez Montaño in 2006. It was designed to introduce sportfishing to the locals, involving not only the adults in the many small communities that dot the coastline of the state, but the children as well.  When El Gobernador Agúndez left office the incoming Gobernador decided to abandon the series for economic reasons.

At that point, recognizing that every tournament is an opportunity for sportfishing education in small communities, Meza and Sors decided to work together to resume the important series. Punta Eugenia, Abreojos and La Bocana were added to the list along with the tournaments planned for the future.

Pedro Sors' interest in sportfishing is deep and goes way beyond just catching fish, which he seems to be doing somewhere in Mexico every week. In 2003 he discovered that sportfishing was not officially recognized by the Mexican government. It didn't exist legally at that time. The National Council of Fisheries only recognized groups officially designated by the government.

He began speaking to fishing friends encouraging them to unify and form a Federation of Sportfishing. Taking advantage of the people he had met though his television program, several years later in 2005 through his efforts and those of other friends and acquaintances, the Federación Nacional de Pesca Deportiva A.C  was formed representing sportfishing clubs in seven Mexican states initially.
Since then, the group has grown to represent sportfishing clubs in twenty-seven states with a combined membership of 32,000.

According to Sors, founder and past president, some of their accomplishments include:

Acquiring two seats on the National Board of Tourism that meets twice a year.
They encouraged states to facilitate the sale of fishing licenses, allowing the license fees to be used in        individual states.
Convinced the Secretary of the need for more boat launching ramps resulting in an ongoing program that resulted in 80 new or improved ramps between 2009 and 2011.
Persuaded the Federal Secretary of the Treasury, a golfer, to eliminate Boat Permits by arguing that golfers were not required to pay green fees for their golf carts so why should the government charge a sportfisherman a fee for the boat he fishes from.
The Federation has fielded and won in several International World Sportfishing Championships,  as well as hosting Big Game and Bass championships in Mexico.
The Federation addressed a law forbidding  filleting fish aboard a boat and convinced the Secretary to amend the wording to read that it is unlawful to unload filleted fish.
It was against the law to fish with live bait. The Secretary was uninformed about sportfishing. When the Federation explained how many families supported themselves by selling live bait he realized the law needed to be changed.

These are the kinds of issues the Federation seeks to change. Though it has had some setbacks and failures along the way, it has had many successes.

Julio Meza and Pedro Sors, both avid and passionate Mexican sportfishermen, seem to be taking up where the group I wrote about in May 2009 http://roadtrekker.blogspot.com/2009/05/grass-roots-tournaments.html left off, continuing to introduce and promote sportfishing throughout Baja.  Their efforts on behalf of sportfishing should be applauded by anglers everywhere!
Posted by That Baja Guy at 5:00 AM