Right Before My Eyes

A Buena Vista resident for many years emailed me recently. His subject line, “Right Before My Eyes,” caught my attention. The gist of his email was about civilization closing in on his East Cape paradise. Each day, more rules, enforcement and red tape were intruding on the laid back lifestyle that had lured him and his wife to the area in the first place.

I first arrived in East Cape in 1973, soon after Mex 1 was officially opened. The area consisted of a few hotels, Palmas de Cortez, Punta Colorada and Rancho Buena Vista, that had gained popularity with Ray Cannon’s help. In those days the area was only accessible by a ride in a hot taxi or an Air Taxi that flew out of La Paz.

The air taxi was an old rickety DC3 which sat on the runway at La Paz until there were enough passengers to make the flight to the few hotels that dotted the coastline between La Paz and Cabo San Lucas. The trip in the DC3 was an adventure in itself as the pilot had to turn the blades to get it started and had to flyover the dirt strips to be sure the livestock was clear.

The hotels were rustic, offering shelter but few amenities. Home cooked meals and plenty of booze was the norm. Hot water was a bonus and most of the electricity came from generators that rumbled into the night. The only outside communication was either ham radio or later SSB Marine radios. At night with little ambient light, the bright stars lit up the dark sky.

The extraordinary fishing attracted the clients. Aside from the few locals who fished, the hotels’ fleet (combined) was only thirty boats.

Over the next decade, improvements came slowly. More hotels sprang up, more fishing boats materialized and a few adventuresome Americans began to build private homes. Federal power became a reality, not consistent, but better than the noisy generators. Roads improved, a telephone office opened first with a few phones and cubicles, providing the ability to make long distance calls. A grumpy Mexican lady who didn’t speak English ruled the telephone “office” and actually connected the caller to their party. Most groceries were purchased in La Paz, where locals did their banking.

By the mid eighties, the area came into its own. Telephone service became available for private homes, and the telephone office on the highway disappeared. Later Cellular telephone service became available…a welcome addition. Hotels grew larger and offered more amenities. More boats were added to the sportfishing fleets. Fishermen began equipping their ATVs with rod holders to carry multiple fishing rods and prowled the beaches in search of fish. The ATVs became a favored mode of transportation along the beach for visiting and bar hopping.

Then wonder of wonders, Cabo Pulmo was declared a Marine Preserve set aside for diving only and no fishing allowed.
The nineties brought ATV rentals; more, larger, expensive houses were built along the beaches, in some places side by side like track homes in the U.S.

One custom home that spilled down the face of the cliff to the beach actually was featured in Architectural Digest. Service clubs were established. Women’s Bunko met weekly to exchange gossip, have a cocktail or two with lunch during the game. An annual Shakespeare Festival was born and the retirees competed for the parts. Art Festivals, Bocce Ball Tournaments, Fishing Clubs, Gardening Clubs were formed to satisfy the residents’ need to feel at home.

The Millennium arrived with much fanfare; real estate prices soared. Internet connections via DSL replaced VHF radios as the favored means of communication. Mini shopping centers sprang up, then a pitch and a putt golf course. ATMs, then a real bank, a vet clinic, and a new emergency medical clinic,

Paved streets and street lights were pointed to with pride by the recent immigrants to Baja. Hotel properties changed hands with new owners promising bigger and better. All these changes were hailed as signs of how far they had come in improving the innocent small Mexican village.

Recently more changes included. PROFEPA, a Mexican version of EPA, visits homes and beaches demanding clean up and evidence of permits. Cabo Pulmo Marine Reserve is being policed to enforce no fishing in the area. The Port Captain is checking to be certain anglers have valid fishing licenses and respect catch limits. These changes are what were needed, but before their eyes, they realized that the changes may have shattered the unstructured, laid back Eden they had once searched for and thought they had found.

While this is happening in one small community in Baja, it is being repeated time after time up and down the Baja Peninsula before everyone’s eyes!
Posted by That Baja Guy at 12:47 PM 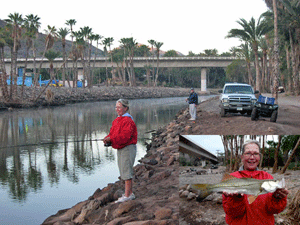 The snook show has been great here for the past couple of weeks although I have yet to be able to put a big one on the bank...we have broken off numerous giants. My wife, Roz, has been spooled twice, and I was spooled with my 8wt.

Standing in the Western Outdoor News Booth at Fred Hall, Kit McNear turned to me and said, “You’re the snook guy?”
Of course I acknowledged that I am. I’m the one who ran fifty-five miles in a panga several years ago inside the esteros at Magdalena Bay chasing an old snook tale that my predecessor Baja Columnist, Fred Hoctor, had told me. When I went on that, I wasn’t sure I believed him, but that run paid off! One of the snook I caught on that trip ended up on the cover of my Magdalena Bay book.
Kit continued, “And now snook are going off in La Paz Bay! The locals are catching some slugs around the wrecks. My boat is in the Marina and I am going to try to fish for them a few days every month. Do you want to go?” He asked.
My head nodded like a bobble head doll on a Baja taxi dash, “You bet!” I replied.
The following week as I was posting my report on the Baja Nomad Online Forum, I saw a posting that jumped out at me… Mulegé Snook. The thread went on for two pages all about a snook show in the Santa Rosalia River that runs through the middle of Mulegé.
No way, I thought. I have driven over the river on the Mex 1 Bridge looking down at the murky brownish green water hundreds of times, while retelling one of my favorite Ray Cannon stories about the almost mythical snook caught in the old days to any ‘newbie’ riding down with me.


According to my friend, Gene Kira, author of The Unforgettable Sea of Cortez, he had tracked down Lou Federico who fished the river with Cannon in the early fifties.
“How large were those snook?”
Lou swore there were "lots" of 40-pounders and at least one that would have gone 70 pounds if it had been weighed. The big ones were so powerful they couldn’t be stopped with a rod and reel, but were harpooned at night using canoes and carbide miners' lamps.
“They were wiped out,” says Lou, “by the big Chubasco of 1958 that silted in the river.”
“After that,” he continued, “there were never any giants again, just small ones.”
So for more than thirty years everyone took it for granted that they were gone forever. Don’t you love these kind of Baja stories…they’re back!
One explanation for the recent ‘Snook Stirring’ is that the Government recently dredged the river and cleaned out undergrowth to facilitate quicker runoff during floods and improved the river bank access.

One of the individuals posting on the Nomad Board was my friend, Mike Reichner, who lives on the river.

Mike said, “I don't think they just showed up...I think they have been here for awhile but no one targeted them. That was my job...just decided one day to walk the river and fish...they might have been here for some time.”
“The snook show has been great here for the past couple of weeks although I have yet to be able to put a big one on the bank...we have broken off numerous giants. My wife, Roz, has been spooled twice, and I was spooled with my 8wt. There ARE some Grande’s here!”

Mike continued.
“The snook are chomping anything, jerk baits, crank baits, large Clousers, but the river is a tackle-grabbing-monster so floating lures are the way to go unless you feel like leaving your tackle box on the bottom of the river.”
Mike added, “The average fish is around 5 pounds with many, many smaller ones, a good sign! Everyone is releasing their snook!”

Big Baja snook are as rare as a fifty-cent margarita and tougher than a shot of cheap tequila. When you see a photo of someone holding a smallish snook with a sheepish smile, they have probably been dusted by a big one and are grudgingly allowing themselves to be photographed with the consolation prize.
Will the Snook Stirring continue? Time will tell, I just hope can get there before it ends.
Posted by That Baja Guy at 10:11 AM