"Billabong Clipper" A vintage G-111 Grumman Albatross combining a 50-year-old military seaplane with the latest in high-tech gear also serves as a clothesline for wet suits.

Private airplanes in Baja have become less and less common over the years, except at major airports like Cabo, La Paz and Loreto. Gone are the days of tail draggers landing on an obscure beach with their passengers hauling out their tents and inflatables and setting up camp for a few days. You can imagine my surprise recently when a private aircraft with a 40,000 lb. payload showed up in a remote camp half-way down the Baja peninsula.

I had begun one of my frequent trips to Baja that morning, crossing the line just at sunup and hurrying through Tijuana. I was soon on the toll road with the cruise control engaged tooling south. Magdalena Bay was my final destination, but I looked forward to an overnight stop in Bahia Asunción the first night. The trip was uneventful and by late afternoon I was headed out west to Bahia Asunción.

Upon my arrival, I was met by Juan and Shari Bondi, owners of a local B and B and fishing operation. The Bondi’s are great hosts and over a fish taco dinner, they brought me up-to-date on the many changes in the area.

Early the following morning, I continued my trip down the dirt road, hugging the coast all the way to Abreojos. Passing through Hipolito, La Bocana and on to Abreojos, the Roadtrek handled the washboard road without a snag.

Plenty of photo stops later, by 3:00 p.m, I was past Abreojos, with plans to spend the night in Mulege at the Hotel Cuesta Real and RV Park which offers reliable Wi-Fi connection. Although I had ample time to make it there before dark, I decided to turn around and stay at the Estero Coyote in Campo Rene. A section of hard-packed road leading into Campo Rene doubles as a landing strip and allows easy access to the RV Park and its small cabins.

I will have to admit that I was feeling pretty smug as I parked my Roadtrek at Campo Rene’s. I was extremely pleased with my self-contained, one-ton van with all it’s electronic gadgetry, including GPS, Satellite Radio, (imagine up-to-date sports and news on remote locations in Baja), and its creature comforts, a flat panel TV, air conditioning, hot and cold running water, and even a refrigerator and microwave.

But, though I have had my share of toys over the years, I have learned there are always others with bigger and better toys. And this was the case that evening.

By the time the sun finished its plunge into the Pacific, the Roadtrek was hooked up. As I was settling in for the night, I heard a loud roar and a huge twin engine plane flew over the park just above the rooftops of the cabins. It circled and came in for a landing.

As the plane slowed at the far end of the dirt strip, the two-stories-tall tail section could barely be seen as the dark settled in. Slowly turning, the plane taxied toward the park. I could hardly believe my eyes as it turned into the park. Spinning around, it stopped.

Silence suddenly returned and the plane’s flood lights illuminated the parking area. The cargo door flew open and seven eerie shadows tumbled out onto the dirt lot into the light.

As I walked toward the plane, I could clearly see in large letters “Billabong” emblazoned on the fuselage of the aircraft. Closer still, I could make out 9 people, several of whom were in an animated discussion with the pilot on how to hang their wet suits from the wing to dry.

I struck up a conversation with one of the two photographers unloading his camera gear. He volunteered that they had left Palomar Airport near Oceanside that morning and flew down in search of big surf. First they had landed at Scorpion Bay finding poor visibility and a crowd of surfers. Leaving there, they hit a few of their “secret spots” before coming to Campo Rene.

"Billabong Clipper" is a vintage G-111 Grumman Albatross. It combines a 50-year-old military seaplane with the latest in high-tech gear and the world's best surfers in a unique expeditionary approach to seeking out the most remote wave-riding destinations on the planet. The Grumman G-111 "Albatross" amphibian is 62 feet long. It features a 96 foot wingspan and a range of over 2500 miles. In its current configuration, it seats up to 13, and is equipped with a 15-foot Zodiac with Honda outboard, 2 jet skis and a rack for dozens of surfboards and surf equipment.

Encountering the “Billabong Clipper” served to kindle my imagination. As I watched them fly out early the next morning, I fantasized having a similar toy to ferry me to the next Baja “hot bite” . 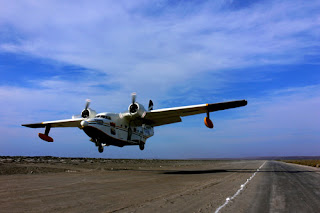 The Clipper takes off in search of the big break