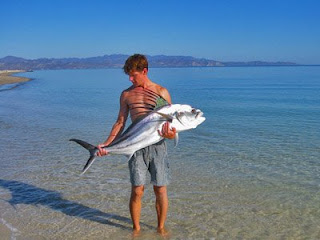 If you spend any time at all on Baja beaches you are going to see some incredibly large shadows cruising along the shoreline in shallow water. It is only when the shadow finds ‘something to eat’ that the shape suddenly materializes into a fish with vivid gunmetal grey stripes and a comb-like dorsal as it appears above the surface of the sparkling Sea of Cortez.

When this happens, you will have just been introduced to some of the largest roosterfish found in Baja. Nicknamed “Bubba” by many, these big shouldered, unusual looking fish with the attitude of a red neck at a Saturday night bar fight are one of the toughest fish to get to bite, let alone catch in Baja.

Years ago, my wife, Yvonne, and I were enjoying a fun morning catching ladyfish from the beach. Ladyfish are a small tarpon like fish that can be anywhere from 12” – 24” inches and are a sucker for small chrome spoons. Their acrobatics as they leap into the air are spectacular. As she was reeling in a ladyfish, “Bubba” came streaking toward her and snatched her fish like a dog grabbing a bone, and headed straight for the deep water. Of course Yvonne never got a hook in the monster, but it was fun to watch, and my brain was spinning with how to put what we had just seen to good use.

Later that year over a cocktail or two, Don Sloan, a fishing buddy and I, hatched this elaborate scheme to catch “Bubba”.

In those days, we fished the East Cape beaches astride ATV’s equipped with rod holders, tackle boxes, etc. For this adventure, we added aerators to our coolers to make live bait tanks and wore headsets to communicate. Our plan was simplicity itself. We would catch ladyfish in the morning until the sun was well overhead. Then we would cruise in opposite directions looking for “Bubba”.

The first half of the plan worked flawlessly. When the sun was high overhead, it didn’t take long to spot our first rooster.

As I cruised high on the beach following the fish, Don baited up a ladyfish down the beach and waited. Closer, closer Bubba came. As soon as it was within casting distance, Don cast the 18” ladyfish out in front of the cruising rooster. Keep in mind that ladyfish are a tough cast at any distance.

The Sea erupted as Bubba pursued his lunch a short distance back toward Don. Don was doing the Baja two-step with a frightened ladyfish and a hungry rooster darting straight between his legs. Finally, with the hapless ladyfish hanging out of each side of its mouth, the roosterfish headed for deepwater.

Up to this point our plan had worked perfectly, but we never did close the deal. Using big hooks or two hooks, letting the rooster run a long time or setting the hook right away, nothing worked! We never landed one!

Sometime later I told my good friend and Baja author, Gene Kira, my “Bubba” story and he told me about “one of the best roosterfish anglers that ever lived” , Bill Mathias, from Tucson, AZ who used ladyfish for bait! 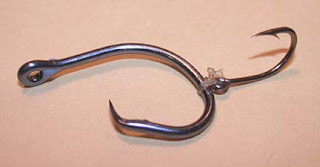 Here is Bill’s set up: A 7/0 Eagle Claw (#2004) circle hook, with the barb crimped flat and the hook straightened so there is no offset. At the middle of the outer bend of this hook, use light mono or dental floss to tie on a smaller 2/0 hook. Hook the ladyfish through the upper lip with the hook pointed downward, leaving the 7/0 circle floating free in front of the ladyfish’s nose. When the bite comes, no hook set is required…it just comes tight.

With that final piece of the puzzle, our catch rate went from zip, nada and zilch, to a remarkable 75% and the circle hook allows an easy release. 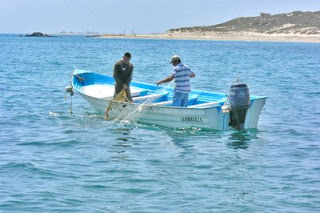 Look carefully and you can see a juvenile rooster ensnared in their net.

For many years now, inshore gillnetting has been a continuing issue in the East Cape area. It was, and is, having a detrimental impact to the inshore and beach fishery.

In April 2002, the principals and representatives of the East Cape Hotel Association, along with government officials, met at Rancho Leonero Hotel with Mario Leal, of La Ribera, and a few others who represented the gillnetters. Also in attendance were many of local residents who were concerned with the constant netting of juvenile fish. This meeting was held in an attempt to put an end to the illegal inshore gillnetting.

At the conclusion of the meeting, a compromise was reached with the gillnetters with the understanding that they would limit the amount of netting along the East Cape coast. Initially it appeared that the agreement would be productive and gillnetting was reduced significantly.

Shortly thereafter, Pescadores del Cortez, a commercial fishing company operated by Mario Leal, began increasing the number of pangas in their fleet, claiming to possess permits which allowed them to net along the shore. Ironically, in addition to gillnetting and selling the fish commercially, they were netting and selling live bait to the local sportfishing fleet.

In April of this year, in the midst of one of the best yellowtail bites in recent memory, (producing some quality fish up to fifty pounds), Mario Leal and his gillnetting gang outraged the locals by wrapping the entire school of yt’s, along with many miscellaneous species, in plain view of Rancho Leonero and the sport fishermen.

As a result of gillnetter’s action, the East Cape Hotel Association embarked on an aggressive campaign to eliminate the inshore gillnetting activity. Local papers joined in the campaign, and armed with photographs and signed statements provided by visitors and locals alike, they have published an ongoing series of stories of indignation at the recent increase in indiscriminate gillnetting activity.

On Wednesday, June 18, 2008, the Jen Wren, a 31’ Innovator owned by Mark Rayor of Vista Sea Sports and captained by Jesus Cota Trasviña, was enjoying a wide open inshore bite near Punta Colorada among a fleet of a dozen or so cruisers and pangas, when one of Pescadores del Cortez pangas from La Ribera proceeded to set a gillnet in the middle of the fleet. As the crew stood on the bridge of the Jen Wren, shooting photographs of the gillnetters pulling their nets, the netters began hollering obscenities and threats and waving their arms.

Subsequently the Port Captain met with Sr. Mario Leal this week. Sr. Leal has refused to accept responsibility for his son’s behavior and indicated that he will hire an attorney to contest the allegations.

So what can you do? The next time you travel to East Cape, you can refuse to buy bait from any panga that has “Pescadores del Cortez” emblazoned on the side. 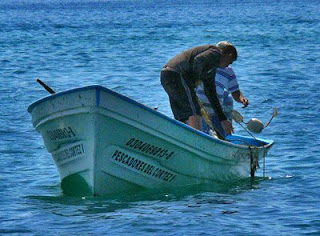 Like so many places in the world, sport and commercial fishing must find a workable solution that will benefit everyone involved. Perhaps the East Cape Hotel Association can be the catalyst to achieve this goal.