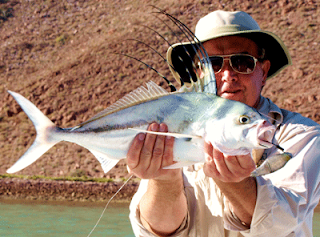 Recently I shared time in Baja with friends, outdoor writers from California, some of whom were experiencing Baja for their first time. Their enthusiasm and excitement was infectious as they experienced one adventure after another. This awakened memories of my own and allowed me to consider my 40+ years of Baja experiences through fresh eyes.

Baja's main attraction is and always has been the fishing. But if you drill down a little further, you realize that it is the catching that counts. As in baseball, it is the play-by-play single base hits that keep you entertained as you hope for that home run.

To put this in perspective, Ray Cannon, first Baja Editor of Western Outdoor News, opened the floodgates of anglers to Baja. First a trickle that soon grew into a steady torrent of fishermen flocked to the area, thus feeding the growth of tourism.

I knew Ray and I can tell you that he was all about catching…not about riding around all day looking for that one trophy catch. He devoted a whole chapter of his book, Sea of Cortez, to catching what my friend, Jonathan Roldan of Tailhunter International, describes as "scaly snakes" or giant needlefish.

In a week that most of the fishing reports were marginal, my Baja ‘newbie’ friends rocked! When they boarded their respective boats in La Paz, they lacked any preconceived notions or expectations. Simply stated, they just wanted to catch fish. The odds were pretty good that whatever they caught would probably be a ‘first’ of a species for them.

Each evening when we gathered for dinner, they had a fish story to tell. The species list was everything from exotic to “you caught what”? To them, every fish was a trophy. They marveled over the strength, speed and acrobatics of their catches. Photos proved that none of their catches were huge, but size didn't seem to matter.
Over the next few days the species list grew; dorado, roosterfish, jack cravelle, bonito, pargo, cabrilla, triggerfish, trumpet fish and one angler even brought out his fly rod and said he had a great time landing, (yep you guessed it), six needlefish on the fly!

At the Fred Hall Show this year, Patrick Sebile, the innovative lure designer had given me some of his latest creation, the magic swimmer, to test-drive. I gave a couple of them to the gang to try. They worked successfully on the roosterfish and there are photos to prove it.

Like Ray Cannon the ‘newbie's’ focused their trip on catching and not intentionally seeking a catch of a lifetime or even worrying about a trophy sized fish. But this is not the end of the story.

Harry Morse, Public Information Officer with CDFG from Sacramento, fished out of Playa del Sol aboard the Maria II with Captain Martin and landed a swordfish weighing between 172 and 176 kilos. The huge fish was caught on a mackerel cast to it while it was finning on the surface.

The battle that ensued for nearly four hours almost ended at the mid-point when the monofilament line began to fray. When Captain Martin realized the fraying line might part, he asked the mate to bring out a second outfit to attach to the swivel on the 20 ft. leader. Between the second and third hour, Morse managed to bring the fish close to the boat but not close enough to attach to the second rod. Finally, on the third attempt, the second line was snapped to the swivel. With Bruce Ajari manning the second rod the seesaw battle continued for almost two more hours. Then, after untangling the flying gaff rope from the propeller, they landed the beast.

As I retold my story to some old gray-bearded Baja veterans, their smug expression reflected their disapproval. I saw the disdain they had over the needlefish and miscellaneous species the first-timers had been so excited over. Maybe the Baja veterans should do a Baja reboot and remember it’s the catching that counts not the fishing. It is easy to overlook an angler’s first trip but it may set the stage for a lifetime of Baja adventures.

In the end, the swordfish became one part of the newbie Baja stories that will be told and retold by all about their first Baja visit. Morse said this ends his desire to fight big bill fish. Every muscle in his body hurt and Ajari decided to go back to fly-fishing! But both are eager to return to Baja.
Posted by That Baja Guy at 2:27 PM 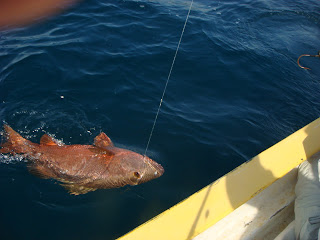 Many personal bests or first-time catches of species were there for the taking for the fishermen in the group . photo by Greg Neiman


With only six months of planning, the city of La Paz successfully hosted the Outdoor Writers of California (OWAC) Spring Conference. The best of the best was brought out for the nearly 50 writers and their guests showcasing the city and the multitude of outdoor activities that are available in the city and the surrounding area. I cannot even begin to name all of the companies involved in making this a conference of such superb quality; only a few of them are mentioned below.

For four days, from early morning to late afternoon, the city's guests fished, snorkeled, dived, kayaked, golfed and explored offshore islands. Then at night they sampled some of the finest restaurants and retired to some of the best hotels in the city.

Each night Ricardo Garcia, Subdirector de Turismo and Relaciones International, and his team of five highly-efficient assistants arranged outstanding, mouth watering dinners at four different venues. Upon arrival, the writers were greeted by the team at Papa’s and Beer Restaurant, where they enjoyed casual outdoor dining on an open patio perched on the sandy shore of the Sea of Cortez where the colorful, gorgeous La Paz sunset welcomed many first-timers to Baja.

The following night, Ray Novelli owner of the five-star restaurant, Palermos, hosted the Awards Banquet in a room that could only be described as awesome, with a picture window waterfall and beautiful decor. The third night, a delicious array of hors d'œuvres, deserts and drinks were served at the outdoor bar of the Costa Baja Resort and Marina Beach Club where once again, we enjoyed the breathtaking sunset.

Our final night, we enjoyed a Fiesta Mexican at Playa El Coromuel hosted by the Chef Association of Baja Sur…special Baja dishes served while we enjoyed the artistic program with music, mariachis and folk dancing.

In spite of the recent reports of 'up and down' fishing, it was as though someone threw a switch and the fishing turned on! Many personal bests or first-time catches of species were there for the taking for the fishermen in the group who fished at both Las Arenas and out of La Paz with the Mosquito Fleet, the Baja Pirates and the Fishermen’s Fleet. Each night when the group gathered for cocktails, the anglers recounted their exploits on the tranquil waters of the Sea of Cortez. Dorado, roosterfish, jacks, grouper, and pargo were only some of the eighteen different species caught.

Even the whale sharks cooperated, and those that chose that activity with Tim Means of Baja Expeditions were not disappointed. Carrie Wilson, WON Columnist, described swimming along with the huge animals as an 'OMG' moment that she would never forget.
A dozen writers and guests described the day they spent at Balandra Bay as THE best kayaking experience ever. BOA, owned and operated by Ben Gilman and his wife Alexia, definitely delivered on the promise they have emblazoned on their business cards, “paddling in paradise".

Fourteen attendees were visiting Baja for the very first time. I asked each of them one question; with all the recent negative press that has appeared recently in the media, what compelled them to come to La Paz at this time?

Alexia Retallack: "The adventure of being outside of my personal comfort zone in Baja was intriguing. After I arrived, it was obvious many of the myths that had been circulated were just not true. Besides, I wanted to go diving."
J.J. Mays : " I was a little nervous but knew that most of the bad stories were near the border. Baja reminds me of the line from a Jimmie Buffet song about 'Latitudes and Attitudes'. I wanted to see the beautiful beaches. I found that it’s a kick back place that can be all you want it to be. Baja is great."
Keith Lair: "We travel quite a bit and crime is common in many places…even in our own backyard in South Los Angeles. We knew that most of the trouble has been along the border and we have felt safe in La Paz and have had a great time!"

John Burk: " I had some concerns but my research confirmed that the crime was no more an issue than at home."

Barbara Steinberg: "I had not heard about the crime problems until the trip was already planned. Friends' eyebrows rose when I told them about the trip, but I was never worried. I had heard so much about Baja and I was sure it would be a good fit…and it is! I feel like Baja is the other California."

A family town, La Paz has one of the lowest crime rates in the U.S. OR Mexico. The remarkable diversity and the surrounding areas offer outdoor opportunities for everyone. The people are friendly, helpful, and go out of their way to make sure the visitors' every need is met. To please half the writers, or even 75% would have been a very good ratio, but to a person, the attendees of this conference all agreed that while it was the first OWAC Conference ever held outside California, it was one of the best ever!
Posted by That Baja Guy at 11:24 AM