Baja and fishing tournaments go together like chips and guacamole. They come in all shapes and sizes. Many are simply an excuse to fish and party, others are serious events providing charities with funds to support a variety of causes; on the other end of the spectrum, there are money tournaments that can literally turn a fish into a huge cash prize, allowing a lucky angler or team to become instant millionaires. While it appears that there are several contests somewhere in Mexico every month, spring always brings a blizzard of press releases announcing a seemingly endless stream of events.

Here are several events scheduled for May which demonstrate the variety of objectives that Baja tournaments offer:

PUERTO LOS CABOS Billfish Classic is the first event showcasing the new marina in San Jose del Cabo
Puerto Los Cabos Billfish Classic - May 7 -- 10 - is the first event to showcase the new marina in San Jose del Cabo. It appears, however, that they are hedging their bets and allowing boats to start from either the Cabo Marina or Puerto Los Cabos Marina. Initially the event included a minimum weight of 160 lbs. for striped marlin. The rule infuriated the sportfishing community and the event found itself embroiled in a controversy over the “kill” format. Anglers using the Marlin Nut forum http://www.marlinnut.com/ mounted an email/letter writing campaign protesting the kill tournament regardless of minimum weight.
After receiving numerous protests Harvey Hunnicutt, IGT President, elected to modify the rules to “release only” for striped marlin. http://www.igtournaments.com/pdf/IGTeBLAST01.pdf
Which is a excellent example of the impact Sportfishing community and individual anglers may have when they band together in support of causes ranging from regulatory issues like NOM-29 to conservation.
The IGT Mexico Tournament Series also includes Mazatlan Billfish Classic, Cancun Billfish Classic, Puerto Vallarta Billfish and Tuna Classic, and Puerto Los Cabos World Cup. These are held at different locations in Mexico and Baja culminating with an IGT Grand Championship (dates to be announced).

Offshore World Championship - May 11 -- 16 -Considered by many as the “Olympics” of offshore fishing, the International Game Fish Association sponsors this serious, non-money tournament, celebrating the skill of anglers from around the world. Since 2000, the event has grown into the sport’s premiere offshore fishing series. All participants are already winners, having won in one of the 130 qualifying events held in 38 different countries.
“Countries and territories from five continents represented so far include teams from Angola, Australia, the Bahamas, Bermuda, Brazil, Canada, Costa Rica, Croatia, Grenada, Guatemala, Italy, Jamaica, Mexico, New Zealand, Panama, Puerto Rico, St. Lucia, Spain, Trinidad & Tobago, Turks and Caicos, the United States, Vanuatu and Venezuela,” said Tournament Coordinator, Ms. Lesley Arico. “The championship currently has 66 teams signed up for 2008 to fish this all-release format using non-offset circle hooks. Events include a fundraiser and auction. Considered the most prestigious catch-and-release blue water fishing tournament in the world, the event also draws the single largest contingent of international teams ever to compete in a fishing competition.” http://www.igfa.org/Offshore_08/tour_os_2008se.asp


World Championship Billfish Release Tournament - May 17th -21st - Another money tournament requiring mandatory use of circle hooks in an all-release format, WCBRT offers a new class of billfish tournament. The event has already attracted anglers from worldwide ports of distinction. The WCBRT is a qualifying event for the IGFA Offshore Championship and will include a Junior World Championship Division. The mission of the WCBRT is to promote competition, sportsmanship and the advancement of billfish conservation in a manner that will insure healthy billfish populations and exciting fishing experiences today and for future generations. http://www.wcbrt.com/index.htm

If you have comments my email address is roadtrekker1@verizon.net
Posted by That Baja Guy at 6:34 AM 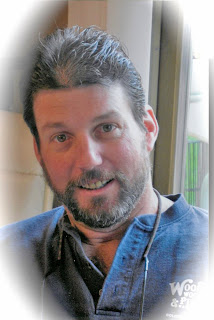 The fabric of Baja is like a serape, multi-colored and consisting of many threads. David Paul Manuel, “Smokey Dave”, was one of those colorful threads.

Smokey’s Baja saga began in the early 90’s when he moved to Baja with one of his best friends and built the successful Manana’s Pizza. By 1996, Dave sold his share of Manana’s Pizza to his partner in order to pursue his dream of sunny days and excellent fishing.

But Clarence Moyers, a former lawyer who had recently opened East Cape Smokehouse, offered Dave the position of General Manager and by 1997, Dave became a full 50% partner in the Smokehouse. He soon became known simply as “Smokey Dave”.
Under Dave’s management, “East Cape Smoke House” was up and running full speed. Every afternoon, Smokey Dave, with his infectious smile and persuasive spirit, along with his team of employees, could be found on the hotel piers greeting the fishermen and gathering their catches for processing.

Dave also began offering the most informative, weekly fishing reports in the East Cape area. Soon the weekly reports became a “must read” for any serious fisherman planning to visit the area.

No matter how busy Smokey became, he always had a smile and a willingness to lend a helping hand as Los Barriles grew. Of course there were the parties and Smokey was known for not missing many. Life was good!
In 2001, wanting to have more time to pursue his passion for fishing, Dave decided to sell the Smokehouse and develop real estate. This allowed him more time to enjoy all the things that had attracted him to Baja. More fishing, more exploring, more time for more involvement in community affairs and more parties. Then the unthinkable happened: Smokey was diagnosed with the “Big C”.

Many members of the community whose lives had been touched by Smokey Dave circled around him and formed group called “Team Smokey”. These were friends who dearly loved him and wanted to let Smokey know that he was not alone in his battle. They were his cheerleaders, the hopers, the prayers, the keepers of faith, the warriors and even the worriers.

One of Smokey Dave's dearest friends in Baja, Markos “Mako” Higginson, periodically sent out newsletters to the group's members, allowing everyone to track Smokey's triumphs and tribulations, and the overall ‘goings on’ in Smokey's life as he moved from Baja to Colorado, back to Baja, back to Colorado, and finally to South Dakota to be near immediate family.

May 18, 2006 was a remarkable day in East Cape. Team Smokey organized a parade of sorts; actually Smokey was the parade!

Members of the communities of Los Barriles, Buena Vista, Las Cuevas, La Ribera and Cabo Pulmo gathered along the streets and waited patiently.

Mako slowly drove through the communities as hundreds of teary-eyed friends bid farewell to Smokey, many holding hand-made signs and dressed in colorful costumes and outfits. Although not wanting to admit it, many felt that it could be the last time Smokey would bask in the warm sunlight of southern Baja, a place he truly loved.

Of course, Smokey stopped in the Smokehouse to say goodbye to the crew, many of whom were hired by him in the early days and needless to say, there wasn't a dry eye. Smokey was clearly moved and he knew how deeply he was loved.

As it turned out, Smokey never made it back to Baja in person but he definitely remains with us in spirit.

Early last November, there was a three-day fiesta to honor Smokey. Many of Smokey’s relatives and amigos from the north came down for the festivities. It began on Nov. 2nd with a pub crawl, originating at Rancho Leonero Hotel, and winding its way to Spa Buena Vista, Rancho Buena Vista, Buzzard’s Bay Cantina, and Tio Pablo’s, and finally ending at Otra Vez. It was quite a spectacle!

Saturday morning, breakfast was served on the beach in Buenos Aires just north of town. Smokey’s friends hung out on the beach all day. At the end of the day, in true Viking fashion, Smokey Dave’s ashes were returned to his Sea of Cortez on a burning bush. 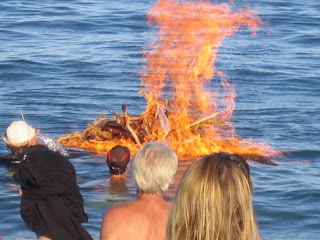 At the end of the day, in true Viking fashion, Smokey Dave’s ashes were returned to his Sea of Cortez on a burning bush.
Casa Dondlinger, close friends of Smokey’s, hosted a dinner, where his amigos enjoyed not one, but two, roasted pigs with all the fixin’s! It was all just as Smokey would have wanted it . . . a celebration of life.

Some seek their dream and achieve it, some find it and fail to achieve it and others find it only to lose it because of something beyond their control. Smokey Dave found his dream! Adios to our amigo, David Paul Manuel, gone, but never to be forgotten.
Posted by That Baja Guy at 5:48 PM