Padre Lucas earned his nickname after performing a “sham” marriage ceremony between members Fred and Ginger Harleman in the small Diaz chapel in Bahia de Los Angeles back in the seventies.

Over the years, Baja has attracted huge numbers of visitors seeking ‘fun in the sun’, but finding so much more. I suppose the highest percentage of these have flown to Los Cabos or La Paz, enjoying what they found there and returning time after time.

However, many have ventured farther into the unpopulated areas as the villages grew into towns and took on new personalities.
Some have not been able to resist driving the peninsula exploring the nooks and crannies until they find that certain place that fits them like a glove. Often they settle in that spot and make it their home away from home. This seems to be the real backbone of Baja.

Recently I received an email from Vagabundos Del Mar Boat and Travel Club announcing a tournament honoring one of their oldest members, Ralph ‘Padre’ Lucas, who had hosted the first event back in 1974 in Bahia de Los Angeles, (Bay of LA).

The email told about that first Vag Yellowtail Tournament which was held out of Papa Diaz’ Hotel over Memorial Day. Padre Lucas earned his nickname after performing a “sham” marriage ceremony between members Fred and Ginger Harleman in the small Diaz chapel in Bahia de Los Angeles back in the seventies.

Then Mama Diaz would charge $4 per person for rice, beans, turtle and Margaritas. If you wanted to get her on your good side, you would bring her gifts of candy, Motrin and cheese. She would always ask Padre to taste the clay bowl of Margaritas and of course he would say, “More tequila”!

Primitive by most standards, Bay of LA is still one of the most beautiful bays of Baja. It is approximately 400 miles south of the Mexican-U.S. border and is reached by traveling south on Transpeninsular Highway Baja 1 to a turnoff at Punta Prieta. The entire drive takes about ten hours.

Over the years, this small fishing community has spread along the shoreline to accommodate a population of approximately 700. Services include a handful of well-run trailer parks and small motels, a launch ramp, three Pemex stations, grocery stores, a pharmacy, a museum, a medical clinic plus two runways for small airplanes along with many places to camp.

Excellent yellowtail and bottom fishing and easy access to this remote fishing village has changed little from the way it was in 1974. Today’s residents and visitors to Bahia de los Angeles can still enjoy that ‘Old Baja’ ambiance and some of Baja’s most beautiful and varied coastal seascapes as well as some killer yellowtail action.

The prized yellowtail can usually be found farther down in the water column, roughly at 90 to 100 feet. The best nearby action is often centered at the northern end of large Isla Smith (also called Coronado), where double-digit sized yellows can be caught on iron and bait over sand/gravel bars. Any of the inner islands can be good as can the deeper water surrounding the many points dotting the shoreline on the inside the bay.

According to Jay Hammer, Vag member and Tournament director, the yellows are showing in big numbers this year. The tournament will be a three day tournament on June 26, 27 and 28, 2009, with awards each day at Casa Diaz. Awards for the top three yellowtail and the top three other sport fish each day. Grand Champion for the combined weight of yellowtail plus other fish. You will need a Mexican fishing license. For updates email Jay Hammer at jayshammer@aol.com .

For those of you who are nervous about driving in Baja, caravanning to Mexico has been the mode for the Vagabundos for 43 years. There is a Travel Buddies Calendar to connect those who wish to travel with a buddy. Call the Vag office at 800-474-BAJA, or 800-474-2252, for more details.

More Bay Of Los Angeles info
http://www.bahiadelosangeles.info
Posted by That Baja Guy at 5:19 AM 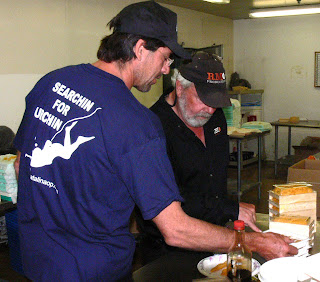 Dan Nattrass explained how the sea urchin (uni) is processed, graded and then packaged in special containers before being shipped.

Dave Rudie, owner of Catalina Seafood Products, was a sea urchin diver in the late 1970s. He began selling sea urchin to sushi restaurants in Japan. Diving during the day, he and his wife, Kathy, processed them out of his garage at night, and he, his wife and his sister, Julie, delivered them the following day. Today he has one of the largest seafood companies in California, providing a product line that includes high quality fresh and frozen fish, abalone, scallops, lobsters, unagi, masago, maguro, hamachi and premium sea urchin with nearly 90 percent of the products coming from the waters off Southern California and Baja.

Catalina’s spokesperson and sales manager, Tommy Gomes, recently offered to show me the company’s processing plant, located on a small side street off Morena Boulevard.

It was there that I met the principal buyer of the fresh seafood from Baja, Dan Nattrass. Who explained how the sea urchin (uni) is processed, graded and then packaged in special containers before being shipped. It is one of Catalina Offshore’s most popular items accounting for a third of their sales. After hearing how much time Dan spent in Baja, I couldn’t resist arranging an interview with him.

Dan’s career with Catalina Offshore began when Dave Rudie sent him down to Baja in search of seafood products, in addition to the popular sea urchin. Dave had shown Dan a live fish that he called an Estacuda (grouper) and asked him to try and find them in the Baja fish camps.

Loading up a ‘clunker’ truck with Styrofoam boxes, Dan drove down the Peninsula, stopping at the remote camps which dotted the west coast of Baja from Ensenada to Todas Santos and then up the into the Sea of Cortez to Santa Rosalia. He only wanted the fish that could be exported to the United States, called “Primira” (number 1) by the locals. That included halibut, grouper (Estacuda), yellowtail, white sea bass, huachinango, tuna, scallops, shrimp, abalone, lobster and sea cucumber.

Once Dan found the fish camps, his greater challenge was to convince the fishermen that improper handling of their catch would reduce the value or conversely, careful handling could increase the value significantly.

Initially the fishermen refused to cooperate. Changing attitudes that had been handed down from father to son for generations was a formidable task. In the beginning, in many cases the fish would come to the scale dried out from lying in the brutal Baja sun in the bottom of a panga.

Convincing the fishermen that quality of fish is all about how it dies and keeping it cool until it was delivered to the scales was essential.

Slowly Dan trained these fishermen in the strict handling procedures necessary to preserve the freshness and optimum quality. Now most of the fish is wild caught, using hand-lines to protect the undersea ecosystem and minimizing the by-catch of other overfished species. Boats now contain chilled tanks to ensure exceptional freshness, and the fish is picked up immediately as it arrives on the beach. Frozen seafood is kept in -20 degrees coolers until exported.

Dan considers scallops to be one of their most successful ventures. Baja scallops today are preferred for their taste and size. Their first delivery was 2,000 pounds, but has grown into a market requiring 60,000 pounds a year.

With his background in environmental studies at University of Santa Barbara, Dan’s goal is not to overlook the by-products created. As an example, the shells from Lion Paw scallops were being discarded. After requesting his suppliers repeatedly to bring shells to him with no success, he finally went to the city dump at Guerrero Negro, and shoveled a load into his truck. After cleaning them, he now sells them to Sushi restaurants as serving plates.

Dan Nattrass is one of the “New Breed” of fishmongers who is making a difference in Baja. With an education anchored in environmental studies his goal is to identify resources that can make a difference to the local villages and fish camp economies. With his tutelage and encouragement, local fishermen are learning how to increase their income by improving the quality of their catch delivered to the scale…not by increasing the quantity.

The complete audio interview with Dan Nattrass is available http://www.bajabackroom.com
Posted by That Baja Guy at 7:31 AM