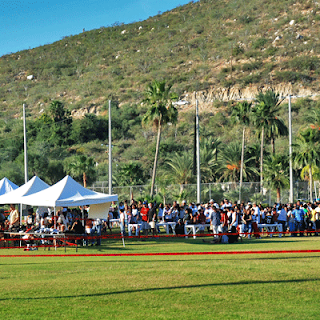 Several hundred families lined up early on a Saturday morning to be outfitted in new shoes and clothing provided by the group.


In late October on a trip to East Cape, I headed down to the beach early one morning to photograph the boats departing for the day’s fishing from Hotel Palmas de Cortez. As I headed out the front gate, I noticed a large group of Mexican families lined up on the Driving Range in front of tables piled high with shoe boxes and t-shirts. Curiosity got the best of me. I parked and walked over to see what was going on.

Jack McCulloch, one of the sponsors McCulloch’s Wide Shoes, proceeded to explain what was happening.

He explained that the Fishers of Men had been holding their tournament in East Cape, Mexico, for several years when a hurricane devastated the area and left the people they had come to know homeless. With a desire to give back to the villagers and help them in some small way, Fishers of Men contacted Soles4Souls, a charity dedicated to donating shoes to the poor, to children, and to victims of disasters. The two groups joined forces and in 2006, the Fishers of Men turned their tournament into a fund raiser, raffling off donations from many fishing industry companies and using the money to pay the freight costs incurred for Soles4Souls to bring thousands of pairs of shoes across the border.

The next year Fishers of Men and Soles4Soles created a second tournament, named ‘Casting for Souls’, for the express purpose of bringing shoes and other donated clothing items to the needy villagers in the East Cape and surrounding areas.

This tournament is now held every October at Hotel Palmas de Cortez and is geared toward members of the shoe and fishing industries. The hotel’s owners, the Van Wormer family, are major sponsors of the tournament and work hard to make the tournament a success. After two days of amazing fishing, the event culminates in the attendees handing out their donations and seeing ‘up close and personal’ the joy of the recipients.

On the third day, tournament attendees handed out several thousand pairs of shoes in one day as well as more than 2,000 of the 5,000 special Guy Harvey t-shirts donated by Bill Shedd of Aftco. The remainder of shoes and t-shirts will be given to needy people by Soles4Souls in the secluded areas of the Sierra Nevadas during trips planned later this month.

It is gratifying when you realize what can be accomplished when a group of “Good Guy’s” comes up with a “Great Idea” benefitting a small Baja Community. 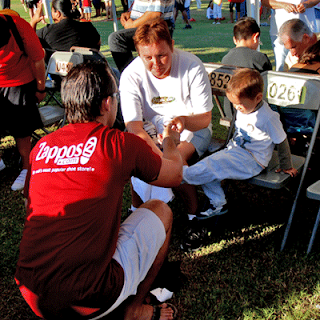 Mom gratefully accepts a brand new pair of shoes for her young son.
Posted by That Baja Guy at 11:00 AM 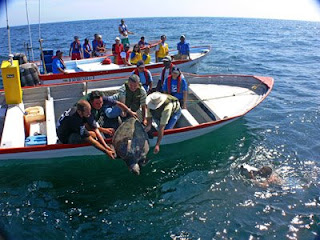 The Proyecto Caguama team, with Gobernador Narciso Agúndez Montaño’s help, measured, weighed, cleaned, tagged and recorded the information about a captured turtle and returned it to the wild.

Puerto Lopez Mateos is one of the hot spots where the critically endangered loggerhead sea turtle gathers in huge numbers to feast on pelagic red crabs. The turtles begin their lives in Japan and then embark on an incredible journey across the Pacific Ocean to Baja where they feed and mature. This journey may take as long as 30 years!
• When the animals are approaching sexual maturity, Pacific loggerheads migrate over 7,500 miles (12,000 km) between nesting beaches in Japan and feeding grounds off the coast of Baja, Mexico!
• During the 3 months or so that a female loggerhead breeds, she will travel natal beaches in Japan to mate and lay 35 lbs. (15.9 kg) of eggs or more, then swim back to her home foraging area, all without eating anything significant.
• From hatchling to adult, a loggerhead increases its weight more than 6,000 times! An adult weighs about 250 pounds.
• Although they are good swimmers, loggerheads have callus-like traction scales beneath their flippers which allow them to "walk" on the ocean floor.

Hoyt Peckham, a graduate student in ecology and evolutionary biology and Director of the San Diego based ProPeninsula since 2003, has been studying the loggerhead turtles in southern Baja California, where they congregate to feed. His research addresses important questions about the migrations, habitat use, and life history of these remarkable animals, and the results are helping to shape future conservation efforts. The problems are many, but Peckham, along with Proyecto Caguama (Project Loggerhead) established by ProPenninsula, is working within the local fishing community to achieve awareness and help change the deep-rooted patterns of the area’s inhabitants. To local fishermen in Baja California, loggerhead turtles had always seemed to be abundant and thriving.

Early on, a local halibut fisherman in Baja impressed on Peckham the gravity of the problem.
“How can loggerhead turtles possibly be endangered?” the man asked. “I caught 30 in my nets this morning.”

Since that first encounter, Peckham and his research team of local student interns have interviewed dozens of fishermen, observed hundreds of fishing trips, and surveyed thousands of miles of beaches to calculate the enormity of the by-catch problem.
“Our findings are staggering,” he said. “We estimate that thousands of loggerheads are killed each year as incidental catch just along a very narrow bit of the Baja California Sur coast.”
Surveys of the nesting beaches in Japan have shown declines in nesting activity of 50- to 90-percent since 1990. Because it takes at least 30 years for a loggerhead turtle to reach reproductive maturity, there are far more juveniles in the population than adults.

Peckham is partnering directly with local fishermen to develop alternatives to current fishing practices and to spread the word about reducing sea turtle by-catch throughout Baja California fishing communities. Wallace J. Nichols, a biologist at the California Academy of Sciences, who pioneered sea turtle research and conservation in Baja, has been instrumental in these efforts. Working with Nichols through ProPeninsula, a bi-national nonprofit organization focused on the Baja California peninsula, Peckham also oversees the efforts of Proyecto Caguama.

Proyecto Caguama provides many outreach activities and materials which include workshops, local student internships, regional turtle festivals, school enrichment programs, community murals, films, and even comic books. Funding for the projects has come from an impressive list of sources. Peckham said the local fishermen are almost always receptive to the idea of protecting the turtles once they understand their important role in the turtles’ future.

Additional information about turtle conservation efforts in Baja California can be found at the following web sites.
www.propeninsula.org/
www.grupotortuguero.org/
Posted by That Baja Guy at 5:30 AM