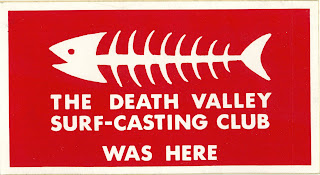 The red patch was emblazoned, “THE DEATH VALLEY SURF FISHING CLUB”.
Several years ago I wrote a feature on Tom Miller, Baja legend and author of The Baja Book, first published in 1974. Tom introduced me to the Baja beaches in the mid-seventies and his book became my Baja bible, providing the most up-to-date information at the time about Baja and its beaches. This book, and others he wrote, inspired me to a lifetime of fishing Baja.
A few years later, I attended a Vagabundos del Mar convention in San Diego where I met my Baja fishing heroes which included Tom, Ray Cannon and Burt Twilliger. For a young Baja neophyte like me it was a exciting event, and Tom and I became friends.
Ray Cannon and his tales of Baja California which were published in Western Outdoor News had stimulated Tom’s lifelong interest in Baja. And Tom was elated to be asked to take over the Baja column for WON when Cannon retired in 1977.
For the next 15 years, until his death in 1992, Tom would call, and when I answered, I would hear, “Hey buddy,”…the unmistakable effusive greeting of my Baja buddy, Tom Miller.
”I am going down to Baja for few days to checkout this or that beach. You want to go?” More often than not my answer was an enthusiastic “yes”! Soon we would be on some deserted beach, eating a variety of fresh caught fish while Tom, talking a mile a minute, would tell or retell one Baja story after another.
One night Tom said he had something to show me, and out of his backpack he fished a red patch which was emblazoned with “THE DEATH VALLEY SURF FISHING CLUB”. “This is my new fishing club,” he smugly said, “What do you think? “
I had long forgotten about Tom’s club until I received the following email from his daughter, Diana Miller Johnson, last week:
“You have no idea how wonderful it was to read your 2007 article, Sentimental Journey about one of your fishing trips with my dad, Tom Miller. I found a PDF of it while searching the Internet. What a great surprise! THANK YOU. I loved your last paragraph.”
Was it my imagination, or could I still hear Tom whooping and hollering, an occasional “hookup!” piercing the air? No, it was probably just the sound of the roaring surf….
“I remember Dad speaking of you. May I ask a favor? On your trips to Baja would you occasionally take a pair of cheap rubber flip flops of the kind Dad lived in and leave them high up on a Baja beach. Draw a circle in the sand around them as he usually did. The thought is that someone who frequents that beach and perhaps fishes there would find them and put a few miles on them. And perhaps in that way take Dad on another Baja adventure along with him. It is something I used to do but landlocked now in Arizona I don't get to the beach anymore. “
I am on another of my Baja Roadtreks now, chasing down the snook rumor in Mulege, then on to check out the roosterfish at Magdalena Bay and finally on to the Thetis Bank to cash in on the rumored wahoo snap.
In between all of that, you can bet your sweet bipee that Diana’s request will be honored…often. I have the flip flops onboard and a pair will be deposited on all of the beaches I visit. However, in this Internet era, I can’t resist attaching a note to them with my email address…kind of a Tom Miller Baja version of a “note in a bottle”.
Oh yeah, one more thing. If you are interested in becoming a member of The Death Valley Surf Casting Club, http://deathvalleysurfcastingclub.com/
Gary can be reached at roadtrekker1@verizon.net
Posted by That Baja Guy at 9:58 AM 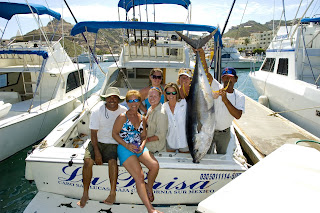 Heather DeRamus, Richmond, Tx., A lady weighing half its' size and it took her three hours caught this 200 lb yellow fin tuna at the Jaime banks near Cabo San Lucas on the “La Brisa” a 31ft. Bertram in the Pisces sportfishing Fleet

While it is common to hear of football-size to seventy-five pound tuna being caught throughout southern Baja, it is seldom that reports from the entire lower half of the peninsula are peppered with accounts of the triple-digit, monster-sized yellowfin tuna. Recently however, from East Cape to the tip of Cabo, encounters with these behemoths (sometimes dubbed as gorilla’s for both their size and tenacity), have been reported.
Just seeing these golf-cart-sized fish air borne, chasing small flying fish down, is a sight that you will never forget. Birds crashing, spinner or spotted porpoise darting to and fro, and large tuna leaping…this is exciting stuff…a run and gun experience that will provide a bigger rush than that third cup of Starbucks.
Big or not, these huge fish are as skittish as a Mexican jumping bean and will disappear as more and more boats converge on them, so if you get to the party late, your only reward will probably be watching anglers on other boats being railed by fish larger than they are.
Many are hooked but few are landed simply because the under-gunned angler’s tackle is not up to the task. Tackle should be outfitted with a minimum of sixty pound line, or better yet eighty if you hope to land one. Fluorocarbon wound on leaders with circle hooks and a good harness are also a must.
The most successful technique is to fling the largest live bait you have in the tank in front of the traveling porpoise. Leave your reel in free spool and use your thumb to slow the swimming bait. When the bait is picked up let the fish run and then throw the reel in gear and hang on. The intensity of the first run is just a prelude to the battle before you. Tackle and angler failure are not uncommon in what can quickly become an extended battle. Dead boating a large tuna swimming in elliptical circles is far tougher than fighting one that is being forced to swim by keeping the boat moving forward ever so slightly.
There are few fish in the ocean that are as tenacious as a giant tuna and will require all the strength and will to win that you can muster. Those who are successful will barely be able to join in the celebration of the catch because of exertion.
Recently Mark Rayor, owner of Vista Sea Sports, landed a 201 pound tuna near his home at East Cape. “When I saw the tuna inhale the live horrilito,” Mark said, “I knew we were in for a fight. On its first run, it took the 80 pound spectra down to where I could see the arbor on the spool of the Accurate reel. We had the fish to gaff after about five hours, but missed the opportunity. It took another three hours more to get another shot at it. We had the drag down so tight it took both hands for us to pull the 60 pound mono off of reel after we landed the fish. The reel got really hot, but the drag pressure never changed and the drags never got jerky.”
“Remind me never to do that again without a harness,” he added.
Another recent success story is the “Sultan of Spring”, 87-year-old Togo Hazard from San Diego, CA, who was featured in this column last year. Still going strong, last week Togo was on his boat, the Dottie B, and landed a respectable 158 pound fish near Gordo Bank.
The 11th annual WON/Yamaha Los Cabos Tuna Jackpot is just around the corner on November 4th through November 7th! With the Gorillas already on the scene, this should be a good time to make a quick trip to Los Cabos to get in a little practice before the event. There is a special Early Bird Entry offer of $15,000…deadline Oct. 9.
Posted by That Baja Guy at 10:27 AM