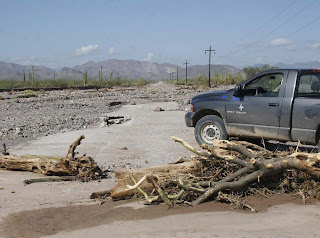 Taking aim at the midsection of Baja, beginning at Magdalena Bay and up to San Ignacio, it literally reduced a number of towns and villages to ruble. 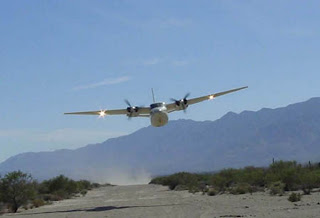 Jack McCormick and the Baja Bush Pilots were among the first to respond to the disaster.

The images of the villages, homes and roads after Hurricane Jimena made its way across the Baja Peninsula reflect some of the most severe devastation that I have ever seen in all my years in Baja. Once Jimena passed the tip of Baja, leaving only rain and minor damage, many dismissed it as the hurricane that couldn’t shoot straight.

But Jimena wasn’t finished. Taking aim at the midsection of Baja, beginning at Magdalena Bay and up to Santa Rosalia it literally reduced a number of towns and villages to ruble.

Jack McCormick and the Baja Bush Pilots were among the first to respond to the disaster. Jack is the publisher of the Airports of Mexico flying guide. His work with the Mexican Government takes him from Baja California to Mexico City and sometimes as far south as Panama. Following in his father’s footsteps, he leads trips of pilots on amazing adventures as they explore Mexico and areas farther south. Jack and his mission are clearly unmatched; his efforts have made flying south of the border simpler for other pilots.

Jack and a few other BBP members flew down on September 4th, taking photos and getting a first-hand look at the damage to the area. After four days of assessing the needs of the towns and villages hard hit by Jimena, they worked out the logistics to the areas affected before they returned on September 9th.

“Our first two days were spent working with the Mexican Red Cross and flying the workers throughout the region to determine what items were needed. Then we spent the following two days working out the logistics for setting up headquarters for receiving, sorting and distributing the items throughout the area.” Jack stated.

The Red Cross determined that the greatest needs are in a box-like area encompassing more than 12,000 square miles beginning around Lopez Mateos north to Campo Rene on the Pacific side, then across to Santa Rosalia, and then north to just above Mulege. In addition to the major villages, the small villages and ranches located within the area were another major concern as all land access is cut off for most of them.

Baja Bush Pilots have enlisted the help of other member volunteers who will be arriving to help with the unloading and distribution of emergency supplies. The first group is scheduled be in Mulege Friday and with the help of locals, they will start receiving and distributing the donated items.

They are planning an airlift beginning on Friday, September 11th and continuing for the following ten days, or longer if necessary. They have 50 fixed wing aircraft and five helicopters that have already been volunteered to assist in this rescue effort. As of this writing, they have deployed ten medical evacuations for people injured as a result of Jimena.

In southern California and the southwest U.S., the Baja Bush Pilots have coordinated with Cruz Roja and the Baja California Civil Protection agency, and they are now flying down emergency medical supplies.
If you are interested in supporting this effort, the Baja Bush Pilots are looking for the following items: Basic first aid and OTC medical supplies, cooking pans, utensils, camp tents, plastic tarps, rope, flashlights, lanterns with batteries, cloth shoes, clothing, blankets, light bedding and of course, cash donations. After the roads open, heavier items will be sought for donation and carried by truck to help rebuild the homes.

To volunteer your help with their airlift efforts, email Jimena disaster relief coordinator, Jack McCormick at Jack@BajaBushPilots.com or visit http://www.bajabushpilots.com/ (480) 730-3250 .