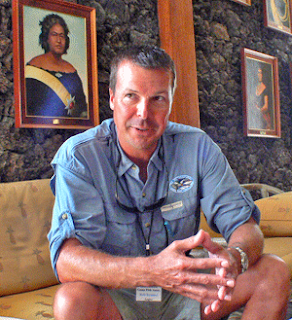 Kramer's appearance immediatley dispels the notion that the IGFA is some kind of ‘old boys club’ where the members sit around sipping something brown and reminiscing about the good old days.

Recently, I had the privilege to sit down with Rob Kramer, President of the 70 year old International Game Fish Association (IGFA).
Kramer’s appearance immediately dispels the notion that the IGFA is some kind of ‘old boys club’ where members sit around sipping something brown and reminiscing about the good old days. He is young, personable and possesses a remarkable knowledge of the fisheries and the issues that confront them throughout the world.
IGFA is best known as the official keeper of world fishing records for the recreational angling community. However this non-profit organization is also active in game fish conservation and in the promotion of responsible, ethical, angling practices through science, education and rule making. IGFA’s mission is accomplished by enlisting the voices of 300 official IGFA representatives in over 90 countries and more than 30,000 angler-members around the globe.

When asked the number of Representative appointees that IGFA currently had in Mexico and Baja, Rob replied, “There are seventeen representatives in Mexico, four in Baja and thirteen in mainland Mexico, the largest number of appointees in any country other than the United States.“

The IGFA Reps are not a ceremonial appointment. To qualify, each one must demonstrate a passion for sportfishing, integrity and local fishing knowledge. Once selected, they serve as the ‘boots on the ground’ liaison between the local angling interests in their respective areas and IGFA Headquarters in the United States. The IGFA Representatives also encourage conservation and supervise and confirm the weigh-ins of world record claims.

During Kramer’s tenure, IGFA and the Billfish Foundation have found a common ground which allows them to work together throughout the world, specifically in Mexico and Baja. Their combined efforts have produced both economic and scientific data which continues to influence fishery conservation issues on both federal and regional levels.

Another area of their cooperation has been to improve the method of tagging billfish by promoting the use of satellite tags in lieu of the more familiar, yet less effective, conventional method that provided limited data.
IGFA, under Kramer’s leadership, is constantly developing innovative new methods to protect marine resources and sportfishing internationally. New initiatives are expanding educational opportunities using curricula developed with the 20,000 students who come though the headquarters facility annually. He hopes to be able to provide direct feeds into the classrooms in Mexico using Internet technology.

Kramer is hopeful that the Mexican Government will heed the overwhelming evidence of the damage to marine resources caused by commercial overfishing. It is imperative to understand that the commercial interests are deeply entrenched. In many cases, fishing businesses have been handed down from father to son for many generations. Their businesses provide income and bread on the table for their families and they are frightened that any change in the law will affect their lifestyle.
For the most part the recreational angler’s livelihood is not connected to the fishery. They simply recognize the importance of establishing limits to prevent the current irreversible trend of ignoring the continued depletion of marine resources until they simply disappear.

Kramer is working to bring the recreational sportfishing interest and the commercial fishing interest together in Mexico and Baja. It is important that all of the groups resolve their differences and get on the same page.
The names and contact information for all the IGFA Representatives are available to members both online and in the World Record book published annually. They provide a valuable local resource for current sportfishing information IGFA members. 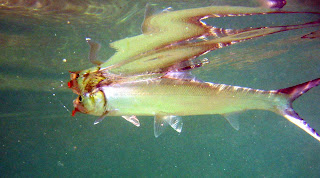 Ladyfish often called sabalo by the locals and a ‘poor man’s tarpon’ by some Baja visitors, is a species that is usually found along almost any sandy beach in southern Baja.


This isn’t about exotics or bragging rights…it is about having a bend in your rod. To paraphrase a country western song, “they like their fish just a little on the trashy side”. You know, kinda’ like the fish caught and recorded in the miscellaneous column on a party boat tally sheet.

Even when the fishing is off the charts and everyone has limited out when the boat returns to the dock, believe it or not there are some hardcore anglers who, after pausing for a cold one and a dip in the pool, are ready for more fishing.
To the extreme, I have walked out on a moonlit beach in front of a hotel after a late dinner and found a handful of enthusiastic fishermen behaving like they were in the middle of an East Coast striped bass frenzy…running up and down the beach whooping and hollering while flinging their lures into the froth of “trash” fish - in short having fun.

Ladyfish, often called sabalo by the locals and a ‘poor man’s tarpon’ by some Baja visitors, is a species that is usually found along almost any sandy beach in southern Baja. They can provide countless hours of entertainment for an avid angler.

What is there not to like? They charge a lure ravenously, strike with reckless abandon, go airborne like a rocket, and perform acrobatics like their larger cousins, the tarpon. They are, indeed a perfect, willing candidate for your light tackle of choice, including a light weight bass outfit, spinning tackle or even an 8 weight fly rod.

In the lure department, small one-ounce shiny lures are appropriate, and for the fly guys weighted Clouser minnows are good for starters. If the lure that you are using has a treble hook, cut off two of the hooks to improve your hookup ratio. If the bites don’t come, begin experimenting with different lures.
Working the beach for the “trash” is not a ‘stand in one place and cast until you get tired’ kind of thing. Keep moving. It is the old cast 1…2...3, step 1…2…3 until you get a bite. Like someone once said to me “they’ve got tails, keep moving”!

After you have made your cast, keep the line tight and let the lure or fly sink for a few seconds. Try a five count. If that doesn’t work, try a little longer. If you don’t get a bite, sweep the rod to bring the lure or fly near the surface and then let it sink again. If there are any ladies around, they can seldom resist this presentation.

Once hooked, ladyfish are usually airborne the instant the hook is felt and you need to be prepared. When you feel the bite, set the hook immediately and stick the rod tip into the water. The purpose of this maneuver is to have as much wetted surface on your line as possible so that when the lady goes ballistic, the friction of the water on the line will hold the hook firmly in its mouth. They are strong fighters and they require steady pressure; they will not settle down and will still be leaping at your feet when you release them.

Like most trash fish, they seem to feed both day and night. Once you locate a school of ladyfish you can expect to have some non-stop action. In daylight hours, watch for the telltale black tails of schools swimming close to the surface. At night listen and watch for the telltale splashes when they are feeding.

If you consider yourself a 24/7 kind of fisherman and are looking for more fishing and less sitting when you visit Baja, the Baja beach may satisfy that need with its long list of species which includes ladies, triggerfish, Cortez grunts, needlefish, cornet fish and many more that are a little on the trashy side.
Posted by That Baja Guy at 2:29 PM