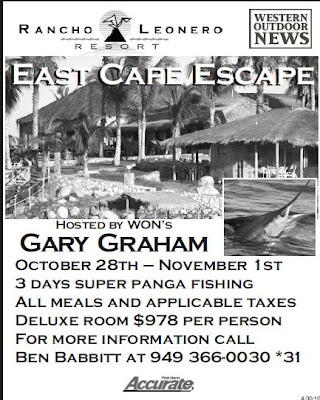 For almost twenty years, we lived a few miles up the beach from Rancho Leonero. I planned my calendar year around being there in October when the fishing was as good as East Cape had to offer. My only reservation when I was asked to host a fishing trip to the Ranch was that I would be sharing one of my treasured secret Baja spots.

Rancho Leonero is a special place located in a special place, hidden away from the highway on a secluded bluff where the only thing between you and the legendary Sea of Cortez is a couple of hundred yards of white sand. First-timers and seasoned veterans both share that magical, almost mystical, tingling as they take in the view upon arrival.

Here the line between "inshore fishing" and "offshore fishing" can become blurred as both are well within sight of land. With hundreds of species, including wahoo, amberjack, jack crevalle, sierra mackerel, yellowtail, grouper, cabrilla, and snapper, the bar for sport fishing quality is raised to a level that is hard to beat. Billfish and other offshore exotics, including dorado, roosterfish, sierra, bonito, skipjack and other middleweight species can often be found within minutes of departure from your hotel. East Cape didn't come by the ‘fish ‘til you drop’ reputation accidently.

The secluded sandy beach in front of the hotel offers some spectacular surf casting. Patrolling the beach on foot with a rod in hand, an angler can experience a fishing challenge seldom found in other venues. Roosterfish, jacks, and pompano are found swimming well within casting range of the beach literally chasing schools of sardina up onto the sand, along with an occasional dorado or yellowfin tuna.

Dialed in, Rancho Leonero regulars often bring their casting rods to breakfast or cocktails in the afternoon. A fish boil so violent that it can be heard can send the hard core anglers flying down the steps from the restaurant or bar to the beach with rod in hand and it is something to behold. The whooping and hollering as rods go ‘bendo’ can be heard all the way back on the patio.

Fish the tackle you want; conventional, spinning or fly…it’s up to you. If you are interested in a fly guide, contact Jeff De Brown at http://www.thereelbaja.com/ or Lance Peterson at 800/919-2252.
For those planning to attend the WON/Yamaha Los Cabos Tuna Jackpot and Fish Hard, Party Harder on November 3 nd through November 6th, East Cape Escape would be a great beginning to your tournament week. Kicking back and catching some fish at Rancho Leonero with no pressure for a few days before switching into the tournament mode may give you the winning edge.

East Cape Escape is about taking advantage of this fishing phenomenon, catching…not competing! Accurate Reels will be providing five reels as raffle prizes along with some additional great prizes that all attendees will have an opportunity to win each night. The dates are October 28th to November1st, 2010, and the cost is only $978 per person which includes four nights in a deluxe room at Rancho Leonero with all meals, plus three days of fishing on a Super Panga and all applicable taxes. With the Volaris airfares at $280 r/t from Tijuana, adding the extra days of fishing at the Ranch is like getting a twofer!

While I spent years guiding hundreds of trips in Baja, this will be the first time that I will be hosting an event. It’s going to be a blast for me, just fishing, talking about fishing and hanging out with a bunch of fishing friends at one of my favorite places in Baja.