Victor Barreda, with his warm smile, impeccable English and eagerness to help was a welcome surprise for the travel-weary yacht owners arriving in Cabo San Lucas over the past 35 years and needing to negotiate through the labyrinth of officialdom in Baja. An innovator, Victor saw a need and found a solution. This characteristic served him well throughout his life as he applied it to his business, community and family.

Victor was born in the rural village of Arispe, Sonora. He competed among 100 primary-school children for an educational scholarship to the United States, and won. His prize was to travel to Tucson and study English upon graduation. After studying in Tuscon, he went on to the University of San Francisco where he received his degree in business.

Returning to Sonora to a job with a major copper company, he married Patricia Lozano Nuňez. In 1972, they moved to Cabo San Lucas where he and Pati taught English. They supplemented their income by selling Pati’s beaded jewelry and homemade cheeses on the beach.

Seeing a need by the arriving yacht owners for help with their Mexican paperwork, they started a ship’s agency business in 1973. During the past thirty-five years, the Barredas’ agency, “Sea Preme”, has specialized in helping visiting sportfishers, powerboaters and sailing skippers alike wade through the documents required by the Mexican authorities.
To understand the immense impact Victor had on the early development of Cabo San Lucas , you have to look back to what he found when he first arrived from Cananea, Sonora. Cabo was little more than a small, remote village nestled on the San Lucas Bay. The incredible fishing a few miles offshore was the attraction to the adventuresome yacht owners whose vessels were large enough to make the journey down the rugged Baja West Coast from California, and even beyond.

It is hard for today’s visitor to even imagine what Cabo didn’t have then. No fancy marina---only the cement quay wall adjoining the soccer field in the inner harbor and only a few hotels and restaurants. If a yacht planned to stay for an extended period, everything from mooring tackle to provisions had to be brought down on the boat. Fuel could only be purchased at the cannery at the entrance to the inner harbor.

“Victor was always there for you for whatever you needed. One day when I was fueling at the old pier getting ready to return to San Diego, Mexican Fish and Game came on board and freaked out over the tank full of cabillitos we had loaded for the trip. In desperation I called Victor on the VHF, and within minutes he arrived. It was the first time I had ever heard Victor speak in a harsh tone to anyone. Needless to say the Mexican Fish and Game got off the boat in a hurry. Victor will be missed”… Bruce Kessler, Yacht Zopilote.

“Victor Barreda was always bailing out us gringos who had come up against the brick walls of Mexican bureaucracy.”… Pat & John Rains, San Diego.

“Back in the late 70’s, finding water and fuel was tough. Victor came up with the idea of hiring a tank truck to deliver fuel and water to the boats at the quay wall. Problem solved. When there was a problem, Victor found a solution. Without Victor, Cabo San Lucas will never be the same”…Captain Peter Groesbeck.

In a community where huge developments and projects were commonplace, Victor demonstrated that innovation came in many shapes. He made “special service” his mantra and applied it to his entire life allowing him to make an extraordinary contribution to the community he chose to call his home.
Victor Barreda, 61, succumbed to a long illness on January 24, 2008. A memorial service to celebrate his life was held February 16th aboard the vessel Tropicat. Victor will be remembered for his integrity and his tireless effort to find solutions to the challenges the thousands of yacht owners and tourists encountered over the years.

According to his wife, Victor always wanted his ashes to be scattered in Bahia San Lucas because he dearly loved the bay and the boaters that it attracted.

Pati Barreda, along with their son, Victor Barreda, Jr. and his wife, Alejandra, will continue to operate Sea Preme, the agency that Victor and Pati created back in 1973.

My email address is roadtrekker1@verizon.net .
Posted by That Baja Guy at 4:45 AM

My family and I have a ton of cherished memories of our many trips in Baja since Mex 1 opened in 1973. For many of those years we towed our boat and often camped on some beautiful beaches…enjoying the fishing and exploring Baja . Family events always seem to include a “remember the trip to……” story or two, bringing laughter and smiles as we reminisce.

Early “Bandito” stories were common, and while they didn’t discourage us from visiting Baja, they certainly heightened our awareness.

Recently, as violence has become more prevalent throughout our society, Baja has mirrored that trend with an increase in ugly incidents, particularly in the area known as “La Frontera”. According to Mexican Officials, illegal drugs and the problems associated with them seem to be the root of the problems.

Authorities on both sides of the border attempt to respond to the increased violence in different ways. Our State Department recently extended a “Traveler’s Alert” which expires April 25. It is the sixth such advisory for Mexico since 1999.

It reads in part, U.S. Citizens:

• Who believe they are being followed should notify Mexican officials as soon as possible.
• Should make every attempt to travel on main roads during daylight hours, including the toll “cuota” roads.
• Stay in the well-known tourist destinations and tourist areas of the cities that offer more adequate security.
• Provide an itinerary to a friend or family member not traveling with them. • Avoid traveling alone.
• Refrain from displaying expensive-looking jewelry, large amounts of money, or other valuable items.


Meanwhile, Mexican officials are scrambling to beef up their security throughout the region. As you travel along Mex 1, it won’t be long before you will encounter a sign indicating there is a military checkpoint ahead. These military checkpoints are designed to be the first line of defense against illegal activities. The number of checkpoints varies, but you can expect to encounter approximately six of them scattered along the highway between Tijuana and Cabo San Lucas. To get a sense of what they accomplish, check out the photos on the bulletin boards while they inspect your vehicle. Please cooperate, be patient and before you know it, you will be on your way. 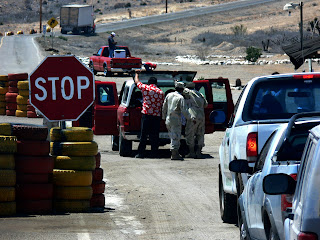 
Over the years, we who drive in Baja, have developed this informal list of “do’s and don’ts” for driving the Baja roads:

• Avoid traveling through the “La Frontera” area, Tijuana through San Quintin, except in daylight hours and limit your stops to emergencies only.

• Stay on the toll roads and don't stop for any flashing lights until you get to a toll booth. (Many of the reported incidents include descriptions of bright flashing lights in the grill of the pursuing car.)

• Keep all of your necessary papers (tourist permit, current registration, Mexican insurance) in one place along with a few small bills. Don’t surrender your driver’s license or passport to anyone….period. Whenever you stop overnight, remove bags and other valuables from the car and take them inside your room.

• Limit your driving at night to emergencies only and never sleep in your rig/car along the road.

• Do not, under any circumstances, pick up hitchhikers. They not only pose a threat to your physical safety, but they also put you in danger of being arrested for unwittingly transporting narcotics in your vehicle. Be especially wary of "stranded motorists" or anyone who tries to get you to pull over.

• Never leave your vehicle with the engine running. Always lock your car and take the keys. Park in well-lighted, busy areas, if possible.

• A locking gas cap will prevent service station attendants from beginning the fueling process until you have verified that the pump has been zeroed.

• It is illegal to carry guns, knives, drugs and/or any other object that may be considered a weapon. It is also illegal to use a cellular phone while driving in the state of Baja California. You must wear your seat belt.

• Mexican Auto Insurance is a must and is available at the border before you cross into Baja.

If you run into a problem, contact Baja Tourist Assistance Hotline 078. They will direct you on how to go about filing a report with the Deputy DA Office (Ministerio Publico).

My email address is roadtrekker1@verizon.net
Posted by That Baja Guy at 4:44 AM