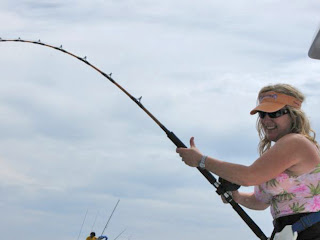 Her one regret is that she only gets to fish twenty days a year.

Unbridled enthusiasm is a rare find! When found in Baja, it is usually a ‘newbie’ who has just begun their Baja adventure. Usually, you don’t find it in a seasoned, eight-year ‘Baja Business’ veteran like Theresa Comber, who operates not one but two distinctly different businesses in Los Barriles. When I met with Theresa, I could feel the energy and enthusiasm as she told her story.
After many fits and starts, East Cape RV Park opened for business eight years ago. The park offers large spaces for big rigs; it is extremely clean and well maintained with showers, swimming pool, sauna and laundry facilities, plus beautiful landscaping. It even offers high-speed wireless internet! With Theresa’s hard work, the park has become one of the most popular campgrounds on the Baja Peninsula and it fills every winter with new and repeat visitors, as well as part-time residents.

Theresa was running a successful high end property management business in Sun Valley, Idaho for fifteen years before discovering Baja. One of her clients invited her to their villa in Punta Pescadero. It wasn’t long until she and her husband, Shawn, were back in Los Barriles searching for a small house on the beach.

A local real estate agent insisted that they look at a five acre lot in the heart of Los Barriles with the potential to be developed as an RV park. The property was covered with cactus and brambles fifteen feet high and Theresa refused to even get out of the car. Shawn, a landscape contractor, returned to the car, and you guessed it! Escrow closed a short time later.

That could be the end of the tale, but Theresa soon realized that her primary purpose for being in Baja was to fish, and she frequently chartered Awesome, a roomy 30' x 12.5' Island Hopper. When she was offered the opportunity to purchase the boat, with little hesitation, she was in the Sportfishing Charter business.
Acting as managing partner, Theresa began defining her market and implementing a business plan.

With her marketing background, Theresa began a strategy to maximize the number of days the boat was chartered. She added popular day trips to her charters, fishing north to Bahia de Sueños, and stopping for lunch at the remotely located Giggling Marlin Restaurant. Then the boat anchors at a secluded beach for some snorkeling. She also added whale and sea life observation trips. Awesome Sportfishing now operates two cruisers… a 30' Island Hopper and a 32' Blackfin.

East Cape RV guests were an obvious group of clients. But another target market was locals who chose not to run their own boats. Drilling down a little further she decided to offer special trips with ‘just the girls’ aboard… learning, sharing, and enjoying fishing and the sea.

At the core of her business plan were the crews of her boats. She wanted to instill in them the importance of providing the best possible experience on the water regardless of the type of trip; simply providing clean...clean boats and savvy crews helped her to increase her client base quickly.

From her own experience of waiting on the dock early in the morning, Theresa knew how annoying it was to wait and see whether her boat would be the first or 20th, so she arranged for Awesome clients to be boarded on their boats right away.

Also included was the implementing all of the internet technology available… buoyweather.com, iWindsurf.com and Terrafin SST-View owned by Jeff Gannon who has a home at East Cape. This allowed her to capitalize on more winter trips.

Theresa said, ” It is always a shock-and-awe experience when I get anything done. One of my ’turn the corner moments” occurred when I was on the beach with our fuel and water trucks, making sure the clients were on the boat when all the other Captains and mates waved and spoke. I felt that I had been accepted!”

“Early morning when I drive through the RV park to take our clients to meet their boats, I am proud of what my boat crews and staff at the RV park have accomplished. There has been so much to learn…Cummins motors, dealing with the mechanics in La Paz and so on…always new challenges to confront,” she said. “Every day I learn a little more.”

According to Theresa, who describes herself as a serial entrepreneur, doing business in Baja has been an exciting adventure. Her one regret is that she only gets to fish twenty days a year.

Gary Graham
roadtrekker1@verizon.net
Posted by That Baja Guy at 1:44 PM 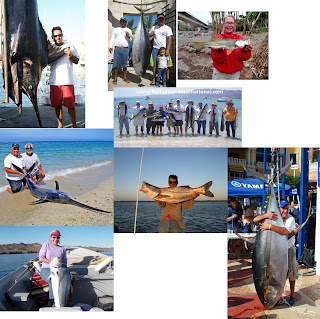 Some of the extraordinary catches of 2009.


Back in the 1960s, Bruce Brown produced a movie called the Endless Summer, a world-wide surfing safari in search of THE perfect wave. My Baja travels began because of the fishing…pure and simple. Earl Stanley Gardener, John Steinbeck and Ray Cannon were among the first to acknowledge that Baja offered an opportunity to shake off seasonal influences...it was a year-round fishery. After making my first trip to Baja, I decided that fishermen could indeed find their own endless season…much closer to home.

In my search to extend the somewhat seasonally-limited offshore fishery in southern California, I have seldom been disappointed in the Baja fishery. Regardless of the time of year, there are always fishing prospects for what I have come to think of as Baja's endless-season somewhere along the 800+ mile peninsula.
My many Baja friends are always generous with their information on what’s happening in their areas.

In mid-January of 2009, Theresa Comber from Los Barriles, reported that she and her Captain (on non-windy days) on her boat Awesome were seeing tailing marlin, and had an occasional bite. They also were getting dorado from 5 to 35 pounds.
Lance Peterson, our East Cape Guide, reported last February, “Just returned from some kayak fishing out front this morning. I could see 20-pound dorado almost on the beach itself chasing a ballyhoo with another dorado swimming on the surface. I also spotted a school of roosters from 10 to 15 pounds.”

In March, the exciting news was that snook had mysteriously reappeared in the Santa Rosalia River which runs through the middle of Mulegé. “The snook show has been great here for the past couple of weeks although I have yet to be able to put a big one on the bank...we have broken off numerous giants! My wife, Roz, has been spooled twice, and I was spooled with my 8wt. There ARE some grande’s here!” This information came from a local resident, Mike Reichner, whose home is on the bank of the Santa Rosalia River.

In April, Jonathan Roldan, of Tailhunter International in La Paz, shared, "We nailed so many fish this week…15 different species! The yellowtail, dorado, marlin and sails (all released) bit like mad dogs!”

Mark Rayor, owner and operator of Vista Sea Sport in Los Barriles, landed his birthday swordfish in May.

The summer season continued in a normal fashion with plenty of fish in all the areas. Fall arrived, producing one of the longest sustained run of cow-sized tuna in recent memory according to Mike Packard, Co-tournament Director of the Yamaha/Western Outdoor News Los Cabos Tuna Jackpot. A 383-pound monster was brought in on the first day of the tournament in early November! Team Captain Oscar Daccarett, boat Captain Perico Sanchoz, and teammates Hugo Piño, Daniel Fisher (owner of the 35 Cabo Fisher Man) and Augustin Piño, landed this largest tuna ever in the event’s eleven-year history!

Meanwhile Shari Bondy of Bahía Asunción, stated that the action for wahoo, dorado, yellowfin tuna as well as inshore remained great into early December.
Eric Brictson, Gordo Bank Pangas out of San Jose, reported that approximately 15 yellowfin weighing over 200 pounds and three yellowfin of more than 300 pounds, were weighed in by the La Playita Panga Fleet in early December, more than in the past five years combined.

Also in December, Tracy Ehrenberg, Pisces Sportfishing in Cabo, announced that one of the fleets’ boats had landed a huge blue marlin estimated to be 865 pounds...the largest in years caught in that area.

As if to have the last word and to put an exclamation point on 2009, Mike and Roz Reichner caught several big roosters during the first week of December near Mulegé.
In spite of serious setbacks, i.e. weak economy, swine flu and alarming crime reports, Baja once again lived up to its reputation of meeting the test of an endless season by providing world-class fishing.

As the new year unfolds, I am eager to see how and where Baja will live up to its well-earned, endless-season reputation in 2010.

roadtrekker1@verizon.net
Posted by That Baja Guy at 1:33 PM