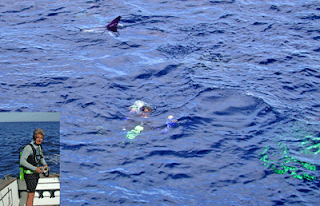 As I jumped from the swimstep into the crystal blue water, I wasn't sure what to expect.

My trip began with a BBC crew filming the Open Ocean segment for the Blue Planet series followed the second week by Dr. Guy Harvey, scientist, explorer, artist, diver and conservationist, along with his crew which included fisheries biologist and marine wildlife photographer, William Boyce. It was on this second trip that I became part of the underwater adventure.
Finding the bait schools for the crews was easy. But figuring out what stage the balling bait was in, was more difficult. There was the formation, the middle and the conclusion.

In the formation stage, the ball…while well-formed…would be seen racing across the surface with billfish in hot pursuit. The billfish would encircle the ball and force it to mill in one place.

Once that was accomplished, the action slowed dramatically. Many gamefish species, striped marlin, sailfish, dorado, tuna, wahoo and even sea lions and whales, would join in the fray.

This was the stage that the divers went into the water, along with their camera and equipment…right in the middle of the gamefish. Once underwater, the divers observed that all of the different species seemed to feed in an orderly fashion. The competition which one would normally expect among the species was absent. The fish each seemed to take a turn at the dinner table!

This activity would continue until a large school of at least 5,000 sardines was whittled down to less than a hundred. Some of the schools would last as long as three hours before they were almost completely devoured. The schooling instinct so evident up to this point would suddenly be discarded and all of the remaining bait would take off in different directions with fish chasing them.
With Guy Harvey and Bill Boyce encouraging me, I decided to take a look underwater for myself. They brought out extra equipment and helped me get suited up. On the next event after the team had been in the water for thirty minutes, they motioned for me to come in for a look. I jumped from the swimstep into the crystal blue water, and made my way out the short distance to where the team was filming a brilliantly lighted marlin slowly circling a school of sardines. As the bait ball changed directions, the light from the sun reflected off the sides of the sardines, like neon lights switching on and off.

Though the striped marlin was the predominant feeders, several dorado with the unmistakable golden, green and blue colors could be seen in the mix. Suddenly, out of the shadows came a dark almost black silhouette with a much larger dorsal completely extended swimming straight toward the bait. It was a large sailfish! As it swam into the circling group, I would have expected some negative reaction from the other fish, but it was accepted and joined in the feeding process. I was so intrigued with the sights, I lost track of time and when Boyce tapped me on the shoulder and pointed in the direction of the boat, I had been in the water almost thirty minutes.

When I popped to the surface to get my bearing I was now thirty yards from the boat. After years of not diving, I will admit it was a bit of a physical challenge to make my way back.

Both weeks provided an education into the underwater feeding behavior of different species of fish, but that second week was a revelation which has provided me with an insight into the behavior of bait and predator that continues to serve me well on my many trips to Magdalena Bay.

My email address is roadtrekker1@verizon.net .
Posted by That Baja Guy at 10:29 AM 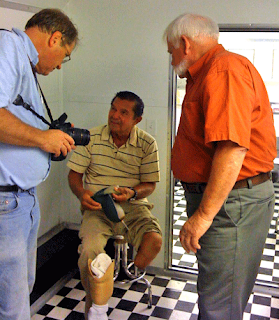 Traveling up and down Baja’s peninsula is as natural for me as commuting to work on crowded freeways every day is to many Southern Californians. I have spent so much time on Mex 1 over the years that I feel like it is an old friend that needs to be visited often.

It’s always a delight to experience the unexpected encounters with friendly locals eager to share their stories with me as well as with fellow Baja travelers…some seasoned and others wide eyed with wonder as they discover Baja for the first time.
Fuel stops are always an adventure as they offer an opportunity to exchange up-to-date information about road conditions with folks coming from the direction I am headed. They provide a ‘heads-up’ on potholes, road construction, and accidents. Other stuff, too--- taco stands not to miss, the old lady selling tamales in the middle of the highway at the other end of town or a Panadería (bakery) with boleos to die for only a few villages farther down the road.

Sure, the reported car-jackings and ugly encounters along Mex 1 in Baja Norte (the frontera zone) cannot be ignored, and I am way more cautious than I once was. I always breathe a sigh of relief as I leave the frontera zone into what I consider “authentic” Baja, San Quintin heading south.

When I was in Mulege recently, I stayed at Cuesta Real RV Park. Paul Boe recognized me in the park and introduced himself and a couple of his buddies, Brad Farrow, CPO and Frank Rodriguez. Paul, a fifteen-year member of Vagabundos del Mar Boat and Travel Club (http://www.vagabundos.com/ ) has been traveling in Baja for many years on missions of mercy to fabricate artificial limbs and orthopedic braces for the less fortunate people in Baja.

They were bubbling with enthusiasm as they related the details of their trip.
First they had stopped in Ensenada to deliver an electric wheelchair to a patient, Coco, of Coco's Corner fame, and they met with some patients at a local rehab house.
In La Paz, they fabricated and delivered seventeen lower limb prostheses (both above and below the knee) and a dozen lower limb braces (mostly to children) at the La Balandra Rotarian Clinic (http://clinicadeamputados.blogspot.com/2008/10/gracias-hasta-la-proxima.html ). There they work with Dr. Alejandro Aguirre, a physical medicine and rehab specialist who happens to be a Rotarian and the "prime mover" in the establishment. He has worked hard to ensure the continued success of this clinic.

When I saw them in Loreto, they had stopped to deliver a resting hand splint for a head trauma patient. The morning I saw them they were delivering a shoe build-up for a little girl in Santa Rosalia who suffered a gunshot injury. After which, they were delivering a walker to an amputee in Guerrero Negro and a wheelchair to a little girl in Bay of Los Angeles. Their final stop was in Ensenada to deliver a below-knee prosthesis they had made at the Rotarians clinic in La Paz.
On the same trip I stayed in La Bocana on the west coast of Baja, twelve miles north of Punta Abreojos. Juanchys Aguliar and his brother, Joaquin, had prepared a huge dinner of shrimp and abalone for a few of their La Bocana friends, and when he extended an invitation for me to join them, I eagerly accepted.
Senor Munro, a relative newcomer to La Bocana, related his experiences of Rocky Point on the mainland side of the Sea of Cortez. His brother, Guillermo, has co-authored a book about the early days of Rocky Point with many old photos that Senor Munro would point to and one by one he would relate another story of the transition of the village from old to new.
They flipped through the pages of a Ray Cannon’s book, “Sea of Cortez” that I had brought along ---and their stories continued as they spotted photos that reminded them of another Baja story that needed to be told. And so it went, late into the night.
Where else could you experience the opportunity to hear stories of good people: Gringos who are making a difference for many grateful patients in a faraway place? Locals who have lived through the changes and development of old Baja and who are willing to share an evening of good food, a glass of wine, colorful stories, ideas and even a few jokes?
This is a part of Baja that many miss but if you are lucky enough to find it, it’s priceless.
My email address is roadtrekker1@verizon.net.
Posted by That Baja Guy at 8:41 AM