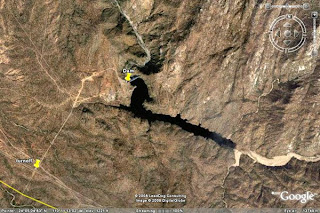 On a recent flight from Cabo San Lucas to San Diego, I had my nose pressed to the window taking in the bird’s eye view of Baja, as I usually do. The plane traveled over Las Arenas and then north toward La Paz on a slightly different flight path than usual.
Midway between Las Arenas and La Paz, the sun glinted on what appeared to be water! I couldn’t remember a lake in that area, so I jotted a note to check it out on the Internet when I returned to my office.
There it was as plain as day on Google Earth...a dam at the northern end, making a dog leg shaped lake approximately two miles in length, located less than a mile off of the road leading from La Paz to Las Arenas.
Feeling like some ancient conquistador, I began making plans to find “my lake.” I knew Mark Rayor, owner of Vista Sea Sports, liked to explore Baja as much I do. And being a veteran of the competitive bass wars, Mark’s answer, when asked, was short and quick - “Count me in!”
It was a cool sultry July morning that promised to be a scorcher when I met Mark at his home for our expedition. He headed for his Bodega where his dusty freshwater bass gear was stored and piled bass tackle and bags of bass lures with odd sounding names in the jeep.
The drive was about fifty miles north on Mex 1, through San Bartolo, with its speed killing topes, then through the switch-back curved road into San Antonio. A right turn off Mex 1 onto a partially paved road led us to the Las Arenas and La Paz road, which we took north for 17 miles.
The unmarked turnoff was easy to recognize from the Google Earth image. What the image didn’t show us was the locked gate on the dirt road leading to the lake. We climbed over the gate and walked another fifty yards before “my lake” became clearly visible.
With rods on our shoulders, tackle boxes in hands, we marched down the dirt path looking like Mark Twain’s Tom Sawyer and Huck Finn…OK, maybe older. 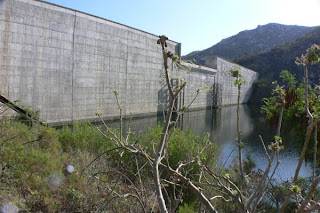 The dam was an impressive structure, towering seventy-five feet above the lake. The construction was surely a major project accounting for the deserted buildings and rusting equipment scattered about.Though surrounded by thick growth, there was evidence that the lake had been fished recently, but we had it to ourselves this day.
Looking for openings in the brush we could see the crystal clear water with small minnows darting everywhere. Using a variety of different style of lures from Mark’s arsenal, we soon had the small minnows following our plastics as we cast working our way around the lake.

Mid-morning the rocks beneath our feet heated up, reflecting the intense July Baja sun. We had seen a weathered rancho perched on a hill overlooking the dam. We trudged up the road and shouted “hello” in Spanish. A voice quickly answered, echoing over the lake, “Bienvenidos! Adelante.”
When we reached the crest of the hill, a young ranchero, Marcial, introduced himself with the inherent friendliness of locals off the beaten path.
Marcial told us that the dam, Presa de Bonita Mujeres, was built twenty-five years ago to provide a reservoir for La Paz and that there were tilapia in the lake that were netted and sold commercially in La Paz fish markets. He didn’t know what additional species of fish were in the lake, but maybe bass!
He volunteered to take us to some cave paintings, roughly a three hour walk, but we declined and asked to return later in the fall when it was cooler.
A patch of water spotted at 20,000 feet, a search on the Internet, an image on Google Earth, meeting a young Mexican man, proud to share the lake in his backyard…welcome to the new millennium in Baja!
Mark and I are making plans to return to “my lake” later this year with kayaks to find that trophy bass with our name on it!
Posted by That Baja Guy at 10:57 AM

East Capes Newest Development closes one era and opens another.

The history of the modern sport fishing era at East Cape really began in the early 50’s. In those days, southern Baja had few people, no highway, no international airport, (pilots landed on beaches and dirt fields), and certainly no marinas. But it did have fish.

In 1952, Herb Tansey, owner and developer of Rancho Buena Vista Hotel, held his grand opening, but business was slow. Early in1957, Herb was about to throw in the towel when Ray Cannon, an American writer and Baja Editor of Western Outdoor News (first published on Dec. 3, 1953), arrived by taxi on the long dirt road from La Paz, along with another writer, Frank Dufresne of Field & Stream. The two writers were on their first trip around the southern tip of Baja, and Ray fell in love with Rancho Buena Vista Hotel. Ray’s fascinating Baja columns’ caught the public interest, business boomed and soon Rancho Buena Vista became the most popular fishing resort there.

When his son, Chuck Walters, joined the Colonel at Rancho Buena Vista Hotel, he had the opportunity to purchase 100 acres of property known as La Capilla, the chapel. He built his home on one of the beachfront lots and lived there until he passed away in the early eighties.

He also built a funky, little-known trailer park with a few houses scattered about. It was sort of an off the beaten track place where most of the spaces and houses had been rented on an annual basis for years. A well kept secret that was mostly known by the locals and tenants.

The Colonel and Chuck shared a vision of what the future could be, and La Capilla and Rancho Buena Vista began a new era.

Mark Walters, grandson, son, and third generation Baja entrepreneur, first traveled to Baja with his parents when he was eight years old. He caught the ‘Baja Bug’ early and visited often. In1979, when his father, Chuck Walters was stricken with cancer, Mark returned to Rancho Buena Vista to live and assist with the management of the hotel.

For nearly three decades Mark had plenty of time to visualize the possibilities and potential that the often ignored La Capilla possessed. Slowly his vision began to take shape…a small gated community perched on the shore of the Sea of Cortez offering many features and amenities that could be enjoyed by a select few who chose to make La Capilla their home.

In November, 2005, the property was sold, and Mark’s vision began to take shape with the help of Davidson and Jones, a seasoned developer from North Carolina…bringing to life what will become one of the most appealing and coveted beachfront communities in southern Baja.

Heavy equipment was brought in to clean away the houses, trailer sites and debris, carefully preserving more than 5,000 trees, cactus and other plants to be used for the final landscaping.

One of those houses, my own family and I had considered ‘home’ for over 17 years.

Recently, I stood high on a bluff with Mark Walters overlooking the hunk of land that encompasses roughly one hundred acres, with one kilometer of extraordinary beachfront on the quiet Sea of Cortez. We were both filled with memories of our own families enjoying that beachfront.

“It was a sad day when the bulldozers knocked down my father’s house,” Mark began. “There were so many good memories there.”

He added, “As I watched the debris being loaded into trucks and hauled away, it seemed like another chapter of La Capilla was closing. I could hear my father’s voice over the rumbling of the heavy machinery. ‘La Capilla, with its natural Baja beauty, must never be broken up and sold off in small pieces. This Baja Oasis is part of our families’ heritage that must be shared with others.’”

“La Capilla will soon be a gated community that will include many more amenities than my father ever dreamed of,” he continued.

“There will be membership in a 14,000 sq. ft. private Beach Club facility which will offer a fitness center, spa, restaurant, bar and infinity pool. Over 50 acres will be designated open space…including paseos (park like corridors) leading down to the beach. The plans call for 224 homes and 100 villas when the entire project is completed, with the first phase completed in the fall of 2009.”

Mark envisions even more changes to the nearby Rancho Buena Vista Hotel. A Nick Price Signature 18-hole golf course is in the planning stage; a luxury boutique hotel and a mixture of home sites and villas are being considered in the future.

Mark Walters feels with the new partners’ help he can deliver the three generation old family vision. Once again, La Capilla and Rancho Buena Vista will lead the East Cape into a new era.