Once a month you’ll find the members of our family en masse at our home in Lake Elsinore…eighteen or nineteen of us enjoying our closeness as we celebrate holidays and birthdays together.  But because we all have busy lives, it’s not often that I have an opportunity to hang out and have some extended one-on-one face time with our children.
A seasoned Baja traveler, our son Geoff announced that he had some vacation time that he would like to share, and a Baja adventure was in the making for the two of us. The plan: he would fly to Loreto, hookup with me in Lopez Mateos where I would have arrived earlier to fish with clients and Lance Peterson, long time Baja on the Fly guide; we would spend a few days exploring the bay together and then Geoff and I would wander around southern Baja for a week.
I had already briefly encountered the Taco Stand dog, by the time Geoff arrived, but she had promptly disappeared. So he and I headed to the Stand only to be disappointed to learn that she was still missing.  As we mapped out the next day's outing during dinner, we were frequently interrupted by locals stopping by to report their latest white dog sightings.
The following morning we launched the 17’ Bass Tracker and sped South, planning to do more exploring than fishing. The three of us savored the excitement of the unknown as we idled over a shallow sandbar through a narrow mangroved-lined channel, barely wider than the boat.
Startled birds squawked as we entered. Several bends later the channel widened, and still we continued. We could hear the sounds of the faraway surf mingled with the splashes of fish jumping and we found ourselves speaking in hushed tones as the channel revealed herself. We stopped occasionally at deeper holes to sample the fishing before moving on.
For several days we explored, carefully marking the GPS waypoints of the most promising channels for future fishing trips, many of which continued a mile or two beyond the entrance. Not once during our exploration did we see other boats. The only memorable local we saw was a snake that was slowly swimming across the channel but when startled by the motor noise, quickly darted up on a mangrove branch to get a better look.
Tired of Taco-stand fare,  Geoff and I drove down to La Paz to visit our friends, Jonathan and Jilly Roldan and enjoy a fantastic wahoo dinner at their Tailhunter Restaurant. It was late afternoon when we arrived, and we were dazzled by the signature sunset from their balcony as we sipped their frosty margaritas.
Arriving back at the compound mid-afternoon, our luck had changed, and my friend Elsa, owner of The Taco Stand, brought me the small, dirty white dog…which I immediately named Sũerte.
Then I received a call from Yvonne; my Mother had fallen. Geoff and I decided to head home at gray light the following morning. After a long day on the road after sunset, we found ourselves south of El Rosario in a construction zone pushing to make it into town before dark, when the right rear wheel slipped off the edge of the road. Only a few miles outside of town, the inner side wall was damaged causing a blowout.
As we surveyed the damage with flashlights, an older pickup heading south slowed and rumbled to a stop. Two wiry Mexican farmers jumped out of the truck.  After a few questions, they had surveyed the situation and the driver had quickly spun his ramshackle pickup around so the headlights shone on the rear of the Roadtrek. Then he seized the jack and began positioning it beneath the axle, while his sidekick grabbed the lug wrench. As the sidekick loosened the lug nuts, he explained they were on their way back to their onion farm on the other side of the arroyo.  They refused to let me help.
They were soon finished and were saying adios. I offered to pay. Politely they refused. Finally, I thrust a couple of bills in the driver’s hand and suggested that he could buy Cerveza. With a big grin and a tip of his sombrero, he took the money, motioned to his sidekick and they both jumped back in their pickup. Heading back to the Cantina for a final--final, I suppose.
The trip was a success allowing my son to experience Baja as I know it.
Posted by That Baja Guy at 5:50 AM 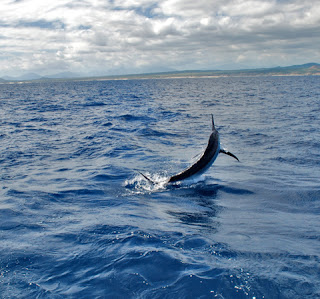 After enduring one of the coldest local winters on record, Baja business owners are converging on Long Beach in record numbers for the Fred Hall Extravaganza. Regardless of their size, they all share the belief that they can provide their old as well as new clients an unforgettable Baja fishing adventure.
You cannot ignore their rugged determination blended with conservative optimism that reflects the tough land they all live and conduct business in.   Most of them believe that last year showed an improvement, however slight, over the preceding dismal seasons which had been influenced by the devastating economic downturn.
Baja's west coast, stretching all the way to the tip, will be well represented. Several marinas offering full services for both trailer boats and sportfishers will entice anglers to consider the Ensenada area for the early season action found offshore as well as inshore.
Stretching below Ensenada all the way to El Rosario is Baja's gateway to some of the best surface and bottom fishing left on the Pacific's west coast. San Quintin has established itself in the recent past as a hotbed of white sea bass fishing but is still virtually unknown.
The relatively new operations which are offering fly-in trips to Cedros and San Benitos plus some extraordinary kelp bed fishing reminiscent of that found on the California coast near El Rosario a half-century ago. Stop by their booth; they will be delighted to show you photos of mossback yellows and world-record class calico bass.
Traveling nearly 800 miles farther down the coast below Bahia Ascension, La Bocana and Punta Abreojos  is the giant sprawling 132-mile long Magdalena Bay. Only recently local operators have begun offering offshore day trips fishing some of the most prolific waters found anywhere in the world. So good, in fact, that several San Diego long-range boats have also begun offering offshore trips in the fall basing out of  Lopez Mateos and Puerto San Carlos. First timers to the show this year will be Mag Bay Outfitters based in Lopez Mateos.
At Baja's tip is Los Cabos, the crown jewel of Baja.  With two huge state-of-the-art marinas surrounded by hotels ranging from luxurious 5-star hotels with world class golf courses to RV parks, the area is always well represented at the show with the newest along with some of the oldest, well seasoned properties found anywhere in Baja. Set aside plenty of time to visit these folks and the wonderful outdoor paradise they call home.
Heading up into the Sea of Cortez the coastline that used to be deserted is now punctuated by high-rise hotels surrounded by manicured landscaping perched above the alternating rocky and white sand shoreline.  They  offer  accommodations for every pocketbook. North of San Jose del Cabo, the newest marina in Baja Sur, Puerto Los Cabos is situated a short distance from several of the most legendary offshore fishing banks found in the Sea of Cortez.
If the East Cape has always been one of your favorite destinations, you'll find it still well represented.  In addition, the two new marinas, Cabo Rivera (with construction underway) along with the Van Wormer's and El Cid's El Anhelo Marina and Resort (beginning construction later this spring) will change the face of East Cape for generations to come by offering unprecedented access for boaters and enhancing the amenities already offered by the existing resorts.
North of East Cape, Bahía de los Sueños with its new golf course will be of interest as well as the several new smaller hotels along the beaches of La Ventana. La Paz, the capitol of Baja Sur is a favorite with many veteran Baja travelers who enjoy its laid back atmosphere. Improved marinas and new golf courses are some of the recent improvements to be investigated in this city.
Farther up the coast there is another new Marina development planned at Agua Verde named Puerto de San Cosme. Then farther still along the coastline is Loreto, Bahia Concepcion, Mulege, Santa Rosalia and San Felipe…all will be represented at the show.
The popularity of the destinations of the Sea of Cortez is reflected in the number of exhibitors found on both the east and west shore. Rocky Point, San Carlos, Guaymas, Los Mochis and Mazatlan will represent the eastern shore.
Set aside enough time during your visit to the show to capitalize on all the invaluable resources available throughout the show. Representatives with generations of local fishing knowledge from all of the Baja areas will be in their booths, eager to share their secrets and hook you up with the trip of a lifetime.
Posted by That Baja Guy at 6:41 AM