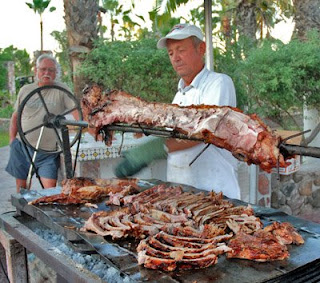 Roughly 750 miles south of the border in the small village of Mulegé, Don Johnson and his family have been hosting an extraordinary Mexican fiesta at his 50-room Hotel Serenidad every Saturday evening for the past forty years.

While I had heard and read stories about this unique event, Serenidad’s authentic Mexican Pig Roast, I had never attended one. On my many trips driving back and forth on Mex 1, my timing always seemed to be wrong and I was never in the Mulegé neighborhood on a Saturday night.

This trip I arranged my schedule so I could be there!

In 1963, Don Johnson opened the Hotel Serenidad on the south side of the Mulegé River complete with a 2,800-foot airstrip which he later lengthened to 4,000 feet. Over the years, the hotel and its airstrip have been a focal point of many Baja adventures, and the ‘Saturday Night Pig Roast’ has become a tradition for numerous Baja travelers.

I arrived at the hotel on Saturday evening where I found a handful of private planes parked on the runway in front of the hotel. The parking lot itself had a mixture of vehicles including RV’s, dune buggies, dirt bikes and even a bright and shiny Lexus, reflecting the diversity of the group inside.

In the bar every stool was occupied and behind them others crowded around ordering margaritas in glasses the size of small bird baths. The price of dinner included the first drink which definitely helped to get the fiesta underway!

Meanwhile, the star of the show, the pig, had been cooked to perfection…long enough for the succulent meat to fall away from the bone. Talk about sweet meat! The cook raises the pigs on a diet of dates that fall from date palms which were introduced to Mulegé by Catholic Priests many generations ago.

Out in the patio, festive decorations and a buffet table laden with the pig and all the ‘fixings’ completed the picture as the waiters announced that dinner was served. Fresh salad, homemade frijoles, fresh tortillas, and several especially prepared salsas were piled high on each plate along with enough of the sweet pork to satisfy the hungriest of guests.

Conversation flowed easy with this group who all seemed to have one common dominator: Baja and its wonders. The table filled up as strangers invited each other to join their table. Before long the dining room was buzzing with Baja chatter as plates of food were eaten, filled and refilled until everyone was full and then dinner was topped off with a special Mexican dessert.

By this time, the Mariachis were beginning their show, which after thirty –five years of practice was impressive. Many guests called out a favorite song as others sang along to someone else’s selection. Still others thought the music called for dancing, and the room was alive with revelry as the guests enjoyed the ‘fiesta’. Excellent food, huge margaritas and wonderful entertainment provided this eclectic group of Baja aficionados the opportunity to step back in time into another world, Baja as it was, and in this case, as it continues to be.

It is easy to understand why this Pig Roast has become a Forty Year Tradition. It was worth the effort to be in Mulegé on a Saturday night, and it is likely that you’ll find me at the Hotel Serenidad fiesta again on my next trip!