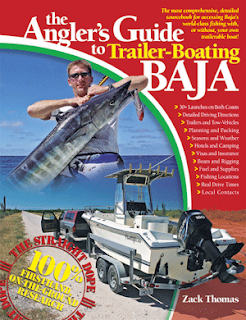 The Angler's Guide to Trailer-Boating Baja is a book full of valuable information that will soon be worn and dog-eared from use.

This past year and half as I have wandered up and down Baja, I constantly ran into Zack Thomas. Wherever I went, there Zack would be, boat in tow and camera in hand. Zack’s explanation was that he was gathering material for a new book.

Last week he stopped by my house to show me his finished product and to deliver my copy of his new 320 page book The Angler's Guide to Trailer-Boating Baja.

Over the past few years, some of the Baja books that have been produced are more fluff than stuff - designed to occupy a corner of your coffee table to impress your friends. Few are serious how to books that requires a place on the seat next to you on your Baja trips. The Angler's Guide to Trailer-Boating Baja is a book full of valuable information that will soon be worn and dog-eared from use.

Dispelling common Baja myths and covering all the "brass tacks" a first-timer (or veteran) Baja boater needs to know, Zack’s new book covers it all — not just paperwork, but also preparing your boat, trailer and tow vehicle for your trip, what parts and supplies are [and aren't] available below the border, driving conditions, drive times, and much more.

The book details more than 30 launch spots, ranging from full-service marinas to remote beach launches. In addition to descriptions and photos of the launches themselves, each chapter includes complete, up-to-date logistical information — where to buy ice, food, and drinks; where to stay and how much it's going to cost; where to wash down your boat; which Pemex stations are most convenient for truck-trailer rigs; navigational hazards to be aware of; where to catch/buy bait, etc.

Towing your own boat into Baja California and exploring and fishing its wild, rich, mysterious waters on your own is an adventure in the truest sense — it never goes quite according to plan. It's a bit risky, and it requires considerable planning and preparation, but you can pretty much count on seeing and experiencing things you'll remember the rest of your life.

However, that first trip below the border can be intimidating. Unfounded horror stories abound about corrupt cops, terrible roads, rampant theft, and "Montezuma's revenge." And getting straight, definitive answers about things like insurance, licenses, visas and regulations can be nearly impossible.

Everything in The Angler's Guide to Trailer-Boating Baja is the result of firsthand research. "The thing that sets this book apart," Thomas says, "is that between November 2006 and November 2007, I towed my own boat to every corner of Baja and scrounged up every scrap of information you'd need to plan a trip to any launch spot on the peninsula. I was always thinking, 'What would I want to know if I'd never been here before?'

If you are still not sure about plunking down your $30 for another Baja book, there is a sample launch-spot chapter, the preface and the table of contents online that you can review at www.bajatrailerboating.com.

If you decide that this is a book for you it can be purchased online or at many SoCal tackle shops.
Posted by That Baja Guy at 10:25 AM 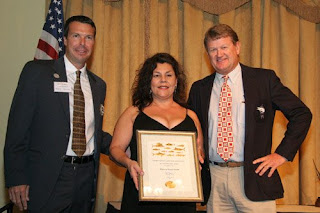 MINERVA SMITH, well known IGFA Representative and head of the Union of Sport Fishers in Cabo San Lucas, Mexico, receiving her award for her continuing efforts on behalf of Sportfishing in Cabo San Lucas from IGFA President Rob Kramer and IGFA Trustee Guy C. Harvey, Ph.D.. In addition to crusading to repeal the flawed fisheries legislation, Shark Norma, to stop long-lining in the recreational fishing boundaries of Baja Sur, Mexico, Minerva has also been a vocal advocate in the campaign to promote the use of circle hooks and encouraging restaurants to remove marlin from their menus in Cabo San Lucas.

The International Game Fish Association (IGFA) recently recognized Minerva Smith, long-time resident of Cabo San Lucas and IGFA Representative, with an award for her conservation efforts. These efforts include promoting the removal of marlin from the restaurant menus in Cabo San Lucas, encouraging the use of circle hooks and her ongoing battle with the Mexican Government to have its flawed fisheries legislation, NOM-029 (commonly known as “Shark Norma”), repealed.

A Mexican citizen born in Sonora, Mexico, Minerva was raised in Southern California and speaks fluent English. When Bob Smith proposed to her and insisted that they relocate to Cabo San Lucas, she didn’t have a clue where Cabo was until she looked at a map.

After moving to Cabo in 1976, they started a small sportfishing charter business. When the town began to boom in the 1980s, their business thrived and by the fall of 1989, they opened Cabo's first tackle shop, Minerva’s Baja Tackle. Located in a small space on the main waterfront boulevard a short distance from the marina, today, Minerva’s Baja Tackle is filled with the latest and greatest fishing tackle and is considered THE tackle shop in Cabo.

Demonstrating the passion common among sportfishermen, t his five foot tall dynamo is fiercely protective of the fishery around Cabo San Lucas and throughout Mexican waters. With a sharks strength and tenacity she continues to go toe to toe with Mexican officials who support NOM-029, legislation that allows long lining within the recreational fishing boundaries.

Since its passage last year she has unwaveringly documented the problems it has created and has insisted that the annual review required by law be completed.

According to the proponents of the legislation, Shark Norma will offer protection for sea life, but Minerva replies that none of the scientists and marine biologists who work within CONAPESCA has been able to explain how the regulation will help sharks, rays, sport fish, turtles or any sea life. The only group that will benefit from this law is COMMERCIAL FISHING! She goes on to say that “sharks and rays are in need of regulation because their habitat is being degraded and they are being commercially over-fished! It is obvious that NOM-029, which allows longlines and gillnets to commercially fish within 15 to 20 miles of the coast, is not the way to protect these same endangered species! The regulation is an invitation for the traditional commercial fishing interests, with the help of CONAPESCA, to target sportfish.”

So where is the Norma-029 today? Currently shark permits are in a state of disarray, the sale and resale of existing permits is unregulated, inspections of fishing equipment are not being conducted and there is absolutely no enforcement.

The law requires that the head of CONAPESC, Ramon Corral, calls for a review of the Shark Norma no later than the anniversary of the laws passing, May 15th, 2008.

In a recent telephone call, Minerva said that it is imperative that all the various organizations have a voice in the revision process; it cannot be left only to CONAPESCA. After all, this is the same department that tried to establish a bycatch limit to include all sportfish.

Fortunately, on February 13th, 2008, Felipe Calderón, President of Mexico, approved through the National Sciences and Technology Council a budget of one million dollar to CIBNOR in La Paz to assure a review of all fishery programs which concern the public or the region. (This means us!) Recently, CIBNOR Institution in La Paz presented some final conclusions showing no grounds on which to allow for the incidental catch of sportfish, according to Minerva.

The number of our supporters grows every day. We have assembled a formidable legal team to continue the battle within Mexico’s judicial system. With everyone’s help we believe that the flawed NOM-029 (Shark Norma) CAN BE defeated once and for all.”

For additional information please visit http://www.billfish.org/new/billfish.asp?pageID=109
My email address is roadtrekker1@verizon.net .
Posted by That Baja Guy at 6:26 AM