A foot for Jesus

A foot for Jesus
Gary Graham
Around Christmas two years ago, I wrote an article about a very special Christmas gift, the fulfilling of an impossible dream of my friend and retired Los Barriles sportfishing Captain, Jesus Araiza, who had lost his right foot below the knee through his battle with diabetes, "Baja's Feliz Navidad spirit sparkles."  To refresh your memory here is the link to that column:  http://www.wonews.com/Blog.aspx?id=1565

Through the kindness and efforts of many good Samaritans, Jesus was fitted for a special prosthesis and began adjusting to the new apparatus. One of those involved in a major way was Greg Birkholz, Arroyo Grande, California, who arranged to have not one, but two "Renegade" feet manufactured by Freedom Innovations, (http://www.freedom-innovations.com/) and donated to Araiza.In early 2001 Greg, himself, was riding his new, big Harley Davidson when it traveled across a center line and collided with an oncoming truck.

“I lost the below-the-knee portion of my left leg requiring me to be fitted with a prosthesis with a "Renegade" foot that I've worn ever since. Also, every limb in my body has some metal in it," he sighed sheepishly.

Birkholz is an avid sportfisherman in central California and upon hearing of Araiza’s reputation as one of the finest Captains at East Cape, Birkholz expressed an interest in he and Jesus fishing together in Baja.

I immediately began organizing the trip and contacted Axel Valdez, Sales and Marketing Director, Buena Vista Beach Resort, who without hesitation, agreed to provide Birkholz and his wife, Lindy, with a week’s stay plus a day’s fishing aboard one of the hotel's cruisers.

Always following up on details, I visited Jesus at his home two weeks prior to the planned trip.
Everything was on schedule.

The Birkholz's arrived earlier this month on their very first trip to Baja and I flew down the same day.  However, after arriving, I called to confirm the fishing trip the following day and the tone of Jesus’ voice told me all I needed to know.

“Oh, my friend,” he began, "I have a problem with the prosthesis and think I better be 'a lotta be careful' and stay home."

Of course I was disappointed at the news and knew that Birkholz would be. It was impossible for me to visit him that night but I was anxious to find out what the problem was.

I met the Birkholz’s and left them enjoying their dinner on the porch under a star-filled sky on a pleasant Baja night…a perfect beginning.

Although we were all disappointed that Araiza was absent, Felipe Valdez, Manager of HBVBR had reserved "Tres Hermanos" for the following morning and we headed out toward the rising Baja sun. The weather was perfect. Trolling, we spotted a few striped marlin but none took the bait. Greg's excitement heightened with each spotting. Then suddenly we were in the midst of a large school of cavorting porpoise and among them we could see yellowfin tuna chasing flying fish. But as more and more boats arrived at the melee, the tuna fled, frightened by the crowd. And still no bites for Greg.

Then suddenly the deckhand, Theodoro -- ironically a grandson of Araiza's -- spotted the unmistakable sickle-shaped tail of a striped marlin pursuing the bubbling bright-colored lure in our wake. As fast as you could say ballyhoo, one was slipped back alongside the lure. The marlin snatched the bait and turned away from the boat as Greg placed the rod butt in his butt-plate and plopped down in the fighting chair.

The tug-of-war went on for more than an hour as Greg slowly gained line, only to lose it back to the fish. Finally at one hour and seven minutes, Greg had his fish at the side of the boat and after taking a few photos, the fish was released. Greg had accomplished his dream of not only catching his first striped marlin, but catching the largest fish he had ever caught as well.

During the rest of his stay he caught dorado, explored East Cape on an ATV with Lindy, and visited Jesus. He discovered that Jesus's prosthesis was too large and a new smaller one would have to be designed.

So more good Samaritans were recruited and old ones revisited. Larry Cooper, http://www.bajaenterprises.com/, a longtime Los Barriles’ resident who is in a wheelchair loaned a spare to Jesus. Charlene Wenger, RN, owner of the newly opened East Cape Health Center, 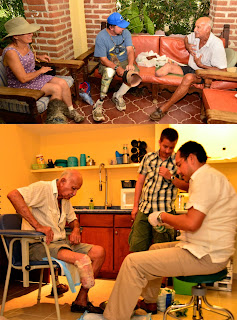 http://eastcapemedical.com/how_we_got_started volunteered her staff including Dr. Enrique Toledo Rodriquez and his assistant, Viggo Ross, to create a mold for the new device. Paul Boe, who has been involved from the beginning, will travel to La Paz in late August to meet with Jesus and correct the problem.

So what began as a special Christmas gift given by countless friends and strangers to a fishing captain who has spent 63 of his 77 years fishing in a small Baja village, has continued ‘paying it forward’, and a trip for one of the givers, Greg Birkholz, evolved into a continuing good Samaritan adventure for both old and new volunteers who graciously continue to donate their time and talents to help others.  This is the best of the best!