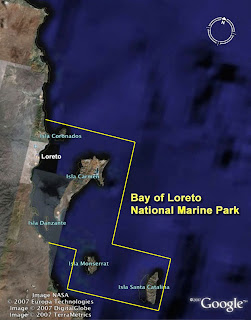 More than a decade ago “Parque Nacional Bahia de Loreto” was established. The park covers a large part of the local fishing grounds off Loreto nearly half a million acres including islands of Coronado, Carmen, Danzante, Monserrat, and Santa Catalina.

Frustrated with the lack of enforcement, the Loreto fishing community decided to turn to an old solution with a new name.
More than a decade ago, “Parque Nacional Bahia de Loreto” was established. The park covers a large part of the local fishing grounds off Loreto…nearly half a million acres including the islands of Coronado, Carmen, Danzante, Monserrat, and Santa Catalina.

The initial plan was to control commercial fishing and sportfishing. Special permits for those entering the park would be issued. PROFEPA, the enforcement branch of SEMARNAP (Mexican Fish and Game), would supply the staff, who would supervise and enforce the rules, issuing citations, confiscating property, and arresting anyone who violated those rules.

On June 1, 2009, Laura Escobosa, the Director of Eco-Alianza, invited local commercial and sport fishermen to a meeting to consider the formation of an organization, Pescadores Vigilantes (vi gilant fishermen). This organization, sponsored by Eco-Alianza, would protect the waters surrounding Loreto.

Pam Bolles of Baja Big Fish Company welcomed the attendees, expressed her gratitude to Eco-Alianza for hosting the meeting and introduced Laura Escobosa.

Ms. Escobosa emphasized the need for local fishermen to unite in order to protect Loreto’s Marine Resources and to improve fishing, an important part of Loreto’s economy. She stated that conserving the waters surrounding the area is simply good business for the entire community and she challenged the many fishermen in attendance to insist on solutions that would guarantee the future economic stability of Loreto’s fishing industry.

Indiscriminate dumping of trash, oils, paints and other waste products cause irreversible damage to its environmental integrity. If the waters off Loreto become over-fished and polluted, the impact on the ecosystem will be devastating. The consequences on local fishing and tourism will be a serious setback to the local economy. Only by uniting can the local fishermen influence the future of Loreto Marine Resources.

While all agreed that the protection of the resources in the park is everyone’s responsibility, in a practical sense, the fishermen who work in the park must assume more responsibility by taking a proprietary interest in protecting resources that provide their income. As fishermen, they need to understand their importance to the tourist economy. They needed reassurance, however, that Pescadores Vigilantes would provide them a collective voice which would be heard when decisions about the future of Loreto are considered.
Ms. Escobosa pledged that Eco-Alianza would provide the following administrative support:

• In the past anyone observing illegal activities feared identification and possible retribution. Now there is a system which provides complete anonymity. Individuals can either call or visit the Eco-Alianza office to report illegal activities, with complete assurance that their names will never be exposed.
• The organization would also create a clearly defined map of fishing zones and no-take areas and produce a simple version of current regulations and guidelines inside the park using the latest information published by the Mexican Government.

Many other ideas were discussed including having a booth at the Marina open from 6 AM to 6 PM daily where visitors could purchase FONMAR fishing licenses and CONANP bracelets. Currently, nothing is available until after 9 AM.
Many attendees voiced their enthusiasm to help with surveillance and to report violations.

Everyone expressed a hope that others from the Loreto fishing community would join the efforts of this young organization and that the group could develop ideas to improve the fishing sector and the resources.
Before the group adjourned it was announced that the next meeting would be held in three months.

PROFEPA, the enforcement branch of SEMARNAP (Mexican Fish and Game) appears to have aggravated another local community enough to require community reaction and action. Pescadores Vigilantes’ success will depend on the strength and character of its members. The resolution to this ongoing problem is a test of wills and the outcome will be determined by the group with the most tenacity and resolve.
Posted by That Baja Guy at 6:18 AM 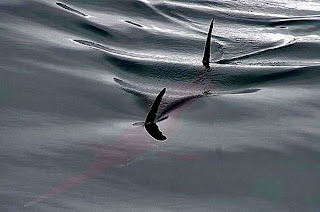 USUALLY SWORDFISH WILL be seen finning on the surface; their distinctive two-finner is easy to recognize.

Even in Baja, where billfish are commonly seen, a broadbill swordfish is an uncommon sight. Seldom seen, hardly ever hooked and heralded as the catch of a lifetime when landed, one swordfish caught on a rod and reel is a remarkable feat. Catching the second one qualifies an angler to belong to an elite group of anglers and the search for the second one can become an obsession.

Roy Edgar “Ted” Naftzger spent a lifetime accumulating a record number of 49 swordfish on rod and reel. When asked about his fixation, Ted replied, “The hunt for swordfish is absolutely magnificent! You take your boat and search the surface of the ocean for your quarry. If it were easy, I wouldn't do it.”

Admittedly not every angler is going to spend a lifetime searching for swordfish, but it is still a good idea to be prepared when one pops up.
Preparation begins with tackle. Gene Grimes, former Captain of the Legend, logged many rod and reel swordfish before his untimely death. “Don’t mess around with anything but a good 80 pound outfit,” he advised. Today, a swordfish outfit should have 80 pound spectra, short mono top shot and 300 pound fluorocarbon wind-on leader with a 10/0 hook.

Bait selection is pretty simple…bigger is better. Having said that, the choice is dictated by what is available. Swordfish have been caught on a variety of baits over the years. Including large, live green-mackerel as well as dead green-mackerel that was frozen and thawed many times. Spanish (8 inch) and squid have also produced fish.

Swordfish are often seen finning on the surface; their distinctive dorsal and tail are easily recognized. They will either be milling in a circle or swimming in a straight line. The presentation of the bait should be based on their behavior and the bait you have. If your bait is alive and the fish is milling, casting to the fish is the best option. If the fish is traveling and you have dead or half dead bait, then trolling is the best approach.

If casting, once the boat is close to the finning fish, approach it slowly. Cast the bait toward the opposite side of the circle of the milling fish. As soon as the bait hits the water, strip line from the reel so your bait is swimming free. The excess line prevents the bait from being knocked off the hook during a violent strike. The fish will often eat the bait slowly, spinning downward, which accounts for a high percentage of swordfish becoming body wrapped.

If trolling the bait, run the line through an outrigger clip, allowing the bait to be placed closer to the fish without spooking it with the boat wake.
When you have a bite, let the fish run until it begins to speed up. Then set the hook hard, numerous times. If you can’t knock the fish off with the hard set, odds are in your favor that you might actually land the fish. Once the fish settles down, apply as much pressure as you can keeping the boat in gear, idling forward. In the beginning the fish will break lead going off to one side or the other. But with the pressure of the forward moving boat, it will tire and settle into a pattern. (This technique also works well on large tuna.) The fish will often come up spinning in the wake.

Many years ago while fishing alone in a 23’ Blackman skiff off San Diego, I hooked my first swordfish. After hours of following the fish for miles, Captain Grimes counseled me by radio to lead the fish. Attempting to follow his instructions and fight the fish at the same time, I idled the boat forward. Inadvertently I was steering the boat in tighter and tighter circles and it wasn’t clear whether I was leading the fish or it was chasing me! An unskilled beginner, it took me 13 hours to land the fish. Since that first fish, all our fish have been caught using the leading technique.

If you are one of those anglers who want to try your hand at a swordfish, be prepared. Think through the wouda’-coulda’-shoulda’s before the event and increase your odds of being in that elite circle of anglers who have caught a swordfish on a rod and reel.

MY FRIEND, MARK Rayor, Vista Sea Sports,East Cape, is a good example of being prepared. Mark thus far has caught three swordfish in the Sea of Cortez.
Posted by That Baja Guy at 9:20 AM