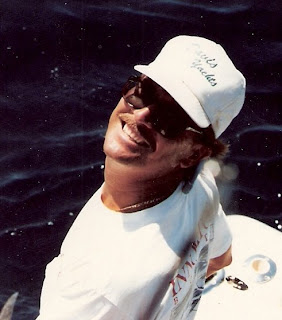 Recently I had the opportunity to sit down with Captain Peter “Pete” Groesbeck to talk about bill fishing in both Southern California and Baja. Pete has spent over 30 years in pursuit of exceptional sportfishing in such spectacular destinations as Alaska, Hawaii, Tahiti, Australia, Costa Rica, Panama, and of course, Baja and Southern California. Currently, he is a member of the Team Bad Company, a professional sportfishing team fishing the billfish tournament circuit in Southern California and Mexico. He also works with Robert Ross, a Baja Developer of the new marina, Puerto San Cosme, http://www.puertodesancosme.com/Main.html just north of Agua Verde between La Paz and Loreto. Pete is considered by many to be one of the best Captains on the West Coast.

I began our conversation by asking how he thought the Southern California fishery compared to the Baja fishery. Pete feels that the volume of striped marlin in California has diminished while the below-the-border marlin population has remained constant or perhaps expanded somewhat. As an example, in the Los Suenos Tournament in Costa Rica last year, out of 18 marlin caught, 16 were striped marlin which are seldom found that far south.

In his opinion, the diminishing marlin in Southern California is cyclical, rather than overfishing.

Pete agrees that the fish caught off the coast of Baja, on average, are smaller than the fish caught in Southern California. The high boat totals recorded earlier this year on the Golden Gate and Finger Bank above Cabo San Lucas were mostly smaller fish in the 60 to 80 pound class, significantly less than the 120 pound average in California. Because of the warmer water and smaller size, Baja stripers are perceived to be less strong than their northern counterparts. However, he was quick to point out that during the Bisbee Cup, he had two fish, both hooked in the corner of the mouth with circle hooks, yet it took 1 ½ hours to subdue each of them.

He stated that another important difference between the two fisheries is that while Southern California marlin season is limited to a few months in the late summer and fall, Baja offers year round striped marlin fishing, giving anglers more opportunity to experiment with new techniques.

Even though the Bad Company Team has been extraordinarily successful, they spend much of their time experimenting with new techniques to improve their performance during tournaments. As Groesbeck puts it, “We are constantly mixing old and new methods that may provide that ‘missing piece’ of the puzzle in a given situation“.

Since the World Championship Billfish Release Tournament required circle hooks four years ago, The Bad Company Team has used them exclusively. Their preferred hook is Eagle Claw 2004 which has proven to be a plus. The wire hooks disintegrate quickly and have only broken in a few rare instances when buried in the bone and twisted. New anglers, unsure of setting the hook when they have a bite, can simply throw the reel in gear and wind. Another advantage to using the circle hook is when the fish sounds, the angler backs off the drag and the fish almost immediately returns to the surface allowing faster release times.

When baiting fish from the bow, star dragged reels are their tackle choice. When I asked why Groesbeck explained, “We prefer lever drags in the cockpit for drop backs. However, on the bow when we are casting to fish the star drag reel can be put in gear instantly and it works better with circle hooks. We are working with Penn on a mid-range casting reel with both a lever and star drag with detents, so that when the drag is backed off, say three clicks, it’s easy to return the drag to its original setting”.

Accurate temperature, chlorophyll and weather charts provide information that can save hours of time and gallons of fuel, eliminating areas where it is unlikely that conditions would attract either bait or marlin, allowing more time to fish the promising areas.

The team’s success can also be contributed immensely to their sophisticated array of electronics coupled with a crew equipped with stabilized binoculars.

What advice did Groesbeck offer to aspiring marlin fishermen? “Don’t fall into a rigid routine; try new methods. Mix and match techniques… don’t forget the old ones nor ignore the new ones. The one thing you can be sure of is that conditions are constantly changing. The angler who understands this and is willing to adapt will always be the one who is the most successful.”

If you would like to listen to the entire recorded interview. http://www.bajabackroom.com/

If the “Swine Flu” pandemic was made into a movie, it would be brought to you by the same folks who brought you the wildly popular, “Drug War Next Door”. The press has lumped Baja into the same category as Mexico City, and instilled fear in travelers.

One has only to turn on the news to hear that the recent outbreak of Swine Flu has a frightening worldwide impact. Precautions are recommended by the medical community, health officials, and even the President of the United States.

However, like the reported “Drug War Next Door”, information cannot be accepted at face value but must be carefully reviewed.

The outbreak began in greater Mexico City, where the population exceeds 22 million people, making it the largest metropolitan area in the western hemisphere and the second largest in the world by population. Located at an altitude of 7,500 feet, unfortunately the cooler nights and hot days make it the ideal environment for the disease to flourish.

However, as with the “Drug War Next Door”, the reporting of the news of the outbreak has been painted with a broad brush which includes the entire country…not just the Greater Mexico City area.

Once again, Baja residents and businesses have found themselves in the middle of a crisis by association, not by fact. It doesn’t matter that not one case of the flu has been reported on the Baja Peninsula at this point in time. From Ensenada to the tip of Baja, the results have been swift. Travel plans have been changed, reservations have been cancelled and the numbers of springtime visitors have diminished. Cities, towns and villages alike have literally become ghost towns.

Because of concerns relating to the swine flu, Carnival Cruise Lines, Royal Caribbean Cruises and Norwegian Cruise Lines representatives stated that the ships have been rerouted to avoid Mexican ports. The economic impact of the loss of nearly 6.5 million passengers (in 2008), could be a major blow to Mexico (Baja), already suffering economically. Losing a luxury ship like the Sapphire Princess which holds 2,600 passengers in 750 cabins, with a stop scheduled in Puerto Vallarta, followed by ports of call in Mazatlan and Cabo San Lucas later the the week, is devastating.

Jonathan Roldan, owner of Tailhunter International in La Paz, reported, “We have been on the phones and internet constantly to answer questions and re-assure our folks that everything is fine. Like the issues of violence in Mexico, the media has used the same paintbrush to color the whole country. As of this time, there has not been a single case reported in the state of Baja Sur. There are more cases in California than in La Paz!”

Clicerio Mercado, Tournament Coordinator, reported that the Second Annual International Governor’s Cup Tournament scheduled for early May, has been postponed to a later date due to the reported outbreak.

The H1N1 Virus seems to have attracted an extraordinary amount of attention by the press, which in itself is interesting, since no one has suggested that the outbreak of this virus will be of apocalyptic proportions.

The World Health Organization raised its alert level to phase five (out of six) this week, indicating a pandemic was imminent. It did so because of evidence that the virus had been transmitted from person to person in Mexico and the U.S. (and in one case, in Spain). The virus could spread or it could peter out – the next few weeks will tell.

It would appear that once again Baja took a bashing by a press corps that was more interested in the sensationalism then reporting the actual facts that Baja thus far has remained Swine Flu free.

Tournaments in Baja are as common as empty cerveza bottles on Cinco de Mayo. When I received the announcement of the Circuito Copa Gobernador Tournament series several years ago, I have to admit that it didn’t end up on the top of the pile. 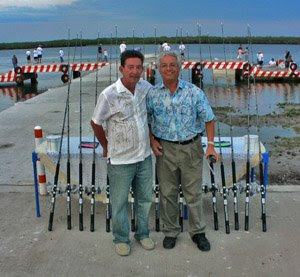 Left to right, Oscar Daccarett, President of the series, and Clicerio Mercado, Coordinator.

Emails continued to arrive, detailing one event after another, and what caught my eye were the off the wall places like Turtle Bay which is farther from Mex 1 than any other seaside village in Baja. It seemed odd that the organizers would expect anglers to trek over a hundred miles on an unfriendly dirt road to fish in yet another tournament.

Upon doing some research, I discovered that Baja Sur’s El Gobernador Narciso Agúndez Montaño and Oscar Daccarett developed this series of tournaments in August, 2006 to introduce sportfishing to the locals, involving not only the adults in the many small communities that dot the coastline of the state, but the children as well. The first Circuito Copa Gobernador Tournaments was held in Bahia Asuncion, a community that was established more than 63 years ago, as part of the festivities when the governor connected that area to the state electric grid.

To date there have been 46 events with over 12,000 participants held in many remote villages throughout Baja Sur. In addition to the cash prizes, ten 23’ pangas with 90-HP outboards have been awarded to locals.
Clicerio Mercado, Coordinator for the Bisbee Tournaments, was given the task of organizing the events with the local officials in each village.
The selection process is simple. Either the Mayor or Delgado of a given town contacts Oscar Daccarett requesting a tournament. Once the request is approved, Mercado goes to work.

Mercado designed the series to be turn-key. From registration to awards banquet, the details are standardized as much as possible. He oversees and assists the locals in arranging all the needed components.

Categories are determined by the surrounding fishery. Cash prizes are offered ranging from $25,000 down to $5,000 pesos. There are goodie bags with T-shirts for each contestant and the kids get fishing tackle. Entry fees are kept affordable to encourage as many participants as possible. The attitude is the more the merrier and no one is excluded. Visitors and tourists are all welcome.

I have attended several of the tournaments and the enthusiasm and excitement generated is infectious. Tournament participants or not, the entire village joins in the festivities. 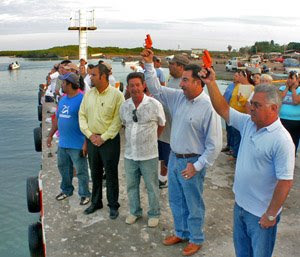 Taking the lead from the big money tournaments, there is a shotgun start which is usually well attended by every government dignitary within a hundred miles, all raring to go but waiting for El Gobernador Narciso Agúndez Montaño and his entourage to arrive in a motorcade of SUV’s.
Excitement builds as the officials pile out of the vehicles and the locals clamor to be seen and heard by the dignitaries. The group strides to the pier where the tournament boats are lined up, the flare pistol is fired and boats roar off in different directions in search of the winning catch. In the meantime, families line the pier and shore, looking for their own winner.
Instead of the glitz and glamour of the high dollar tournaments which have become so common with tourists, Circuito Copa Gobernador Tournaments provide an exciting, fun-filled event designed by the people for the people.

The next event has a slightly different format. It will be held for the second year in Cabo San Lucas, has been postponed due to recent virus crisis. http://www.cabotournament.com/index_e.html