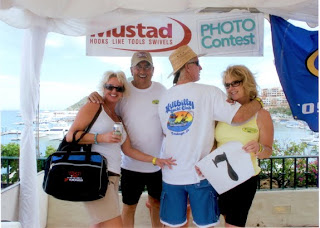 When I spotted Barbara Morris, Randy Matz, Fred and Tawnya Stevens sporting t-shirts with Hillbilly Country Club emblazoned across their backs, I knew there had to be a story there.

The Western Outdoor News Tuna Tournament draws some of most interesting and unique competitors. When I spotted Barbara Morris, Randy Matz, Fred and Tawnya Stevens sporting t-shirts with Hillbilly Country Club emblazoned across their backs, I knew there had to be a story there. It was in the branding.

The four were harking from Coalinga, California, which they quickly pointed out was just three miles beyond the ‘cow smell’… 100 miles north of Bakersfield.

Basically they are fresh-water fishermen who spend most of their summers fishing the Wishon Lake in the Sierra foothills. Randy Matz dreamed up the name Hillbilly Country Club and it stuck for them and other friends from Coalinga who fish trout every summer on the lake.

It was also Randy who had read about the WON Tuna Tournament for years. Three years ago, while they fished from a pontoon boat, which they refer to as ‘dry dock’, he mentioned it again. A few beers helped them decide to give the saltwater tournament a try.

Their first year, Team 7 caught a qualifying fish that put them in the lead for nearly an hour before it was replaced by a larger fish. They still felt as though they were winners. Before the event was over they had won enough swag that they needed an extra bag to get the goodies back to Coalinga. Their prizes included Costa Del Mar sunglasses, Reactor watches, Baja Fish Gear and Eat Me Lures. Their pictures were all over the WON paper, and their photos in the promotional ads constantly reminded them to sign up again.

This year was their second WON Tuna tournament. They signed up for the early bird and were given their lucky number 7 again. When I first spotted their t-shirts, I knew that here were some folks who were bound and determined to have a good time. They even had the tournament motto on the sleeves of their shirts, fish hard and party harder!

Day #1 at the weigh-in, I kept watching for them, but they never showed up. They had not gotten the “catch” part of fish harder, but I figured out that they did understand the party harder! When I saw them later that night at the Yokohama Fiesta, they were whooping and hollering like any good hillbilly!

Friday night, we bumped into them at Solomon’s Bar. Not only had they not caught anything to bring to the scale, they hadn’t even won any raffle prizes! Bummer! Though their smiles and laughter convinced me that win or not, they were enjoying this event. When they finished their drinks and headed for the Reactor Squid Roe party, I reassured them tonight would be their night.

Sure enough when I bumped into them early Saturday morning on my way to the Pete Gray Let’s Talk Hookup show, they were quick to show me their three new Reactor watches and Costa Del Mar glasses to go with them.

The Hillbilly Country Club has already decided to return to Cabo for the 12th Annual WON Tuna Tournament. They are not sure whether it is the fishing, partying, raffles or all the great people they meet during the events, but Team 7 has already booked their boat and are making plans for next year. I can’t wait to the next t-shirts. 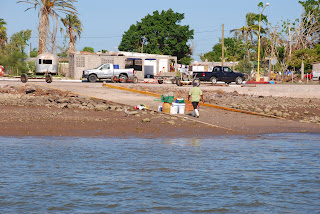 The outstanding offshore fishing in front of Magdalena Bay has taken on almost mythical proportions over the years. From October through December the schools of marlin, wahoo, tuna and dorado are consistently the largest found anywhere in Baja; conversely, the number of boats fishing here is minimal compared to other Baja destinations. With its old Mexico charm still unblemished by tourism and North American influence, Mag Bay has become the topic of many discussions and my email has been filled with questions about this area.

With its popularity growing, each year the number of local boats large enough to access the offshore action comfortably has grown and many yachts traveling to and from Cabo plan their trips each year to take advantage of the outstanding billfish fishery off Magdalena Bay.

Trailer boat access has improved tremendously, attracting more anglers who want to captain their own boats. Both Lopez Mateos and Puerto San Carlos have added new cement ramps which will accommodate larger trailer boats. The recently completed launch ramp and pier in Lopez Mateos is on the southwest side of town (25°11'19.20"N 112°07'00.60"W. In Puerto San Carlos the ramp is located on the southeast side of town (24"47'05.21"N 112"05'37.53"W). Be aware that both have issues when the tide is low.

From Lopez Mateos access to the Pacific through the Boca de Soledad is only five miles from town. However, departing and returning through the Boca (mouth) is not for the faint of heart. It would be wise to either follow another boat through the first few times or hire a local panguero to lead you out.

The channels between the barrier islands are like saltwater rivers and allow everything from tiny baitfish to giant whales to travel in and out of the bay. For those who do not have their sights on offshore fish, inside the bay and the esteros are spotted bay bass, grouper, corvina, sierra, jacks, mangrove snapper, pargo, pompano, halibut and snook.

Ed and Emilia Brennan’s hotel, Hotel Brennan, is the newest hotel in Puerto San Carlos. They offer clean rooms and good service. They will even arrange whale watching or sportfishing for their guests.

Bob and Diana Hoyt’s, Magdalena Bay Outfitters, based out of Lopez Mateos, offers rental houses, several boats, including a 26’ catamaran and a 28’ Boston Whaler, for day trips offshore and additional pangas for bay or estero trips. The Hoyts also own Whales Tale Inn, located on the shore of Santa Maria Bay on Mag Bay Island, a five cabin complex providing one of the few places in Baja where you can still ride ATVs to explore the miles of beaches or to fish for roosterfish and other near shore species. These cabins also serve as a jumping off place for faster access to the offshore fishing grounds. They also offer fuel and support services for visiting trailer boats and they have formed partnerships with several larger sportfishing boats for clients who want multi-day charters.

A welcome addition in Lopez Mateos is the availability of Mexican fishing licenses near the new launch ramp.

On the heels of Olaf and Patricia, this year the marlin season has not yet begun; baitballs which are usually common thus far are missing. The tuna, dorado and skipjack have produced in typical outstanding fashion beginning 8 to 10 miles outside the Boca’s. Fish inside the Esteros, have been easy to come by using the live shrimp purchased from the local commercial panga fleet, but landing the bigger fish is more difficult. Don’t forget the fluorocarbon leader!

For those of you who think that the Baja you originally discovered has vanished, Magdalena Bay will provide you with the tangy taste of ‘old Baja’ that is as intoxicating as an icy margarita.