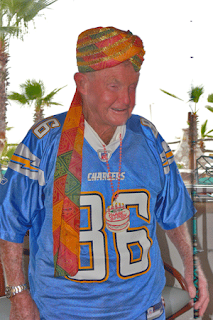 Sultan of Swing proudly displays his new turban and special Charger jersey
Most eighty-six year old men are content to enjoy a good game of Gin and a cocktail. But Togo Hazard isn’t most men, and he isn’t about to let a few years get in his way. In fact, he enjoys life at a pace that would be tough for a man half his age to keep up with.

Don’t get me wrong. Togo likes his card games and cocktails, but his love of fishing is as natural to him as breathing; swinging on fish is something that he has to do.

I suspect, even at his age, he has ‘swung’ on more fish this year than most of us have in many seasons combined, and the year isn’t even half finished.
First, he made his annual winter ‘warm up’ trip to the Tropic Star in Panama in mid-January accompanied by his friends and fishing mates, the manager of Hotel Buenavista Beach Resort, Axel Valdez, and Vincente Cosio, Captain of the Dottie B ll (the newest boat in the Hotel Buenavista Beach Resort fleet) which was named for Togo’s deceased wife, Dottie. They were married for over fifty-one years.

Togo began his trip by slow trolling a ten pound skipjack in a school of porpoise. It soon disappeared in a boil the size of a small compact car. When he threw the reel into gear and swung, he found himself tight to one ‘grande’ tuna which was headed for the bottom. Hunkering down and demonstrating the same toughness that served him well for many years in his San Diego construction business, Togo stayed connected for a remarkable three hours and forty three minutes before the beast was on its side next to the boat…three hundred and fourteen pounds, his largest tuna so far!

Then in April, on one of his monthly trips to East Cape for a week’s fishing on the Dottie B ll, Togo and a couple of his La Jolla tennis buddies…who had never caught a billfish before…gave the East Cape fleet an object lesson of how to swing! The Dottie B ll came in with eleven blue billfish flags a flappin’. Togo’s eyes sparkled as he sprung off the boat with an exuberance that is usually associated with a kid’s first Christmas. Once again, he had outfished the entire East Cape fleet for the day and he wasn’t about to let it go unnoticed.

All of this was just a warm-up for his May trip which coincided with his 86th birthday. Twenty-five friends and family members gathered from far and wide to join Togo in what amounted to a seven-day party suitable for a bunch of thirty something’s. It consisted of fishing all day, gin and cocktails each afternoon, dinner overlooking the Sea of Cortez, and of course laughter all the time. Just the kind of birthday every eighty-six year old would want!

The fishing stories for the week kept piling up! There was the day that Togo’s granddaughters overslept and missed the boat. Togo went out alone and racked up eleven billfish for the day.

“Captain Vincente and the crew tried to kill me,” Togo lamented. “If more than one fish was hooked up, they just left the rod in the holder until I could get to it.”
This turned out to be a hotel record for the number of fish released by one angler in one day.

The week’s total for the Dottie B ll was 31 billfish plus an even dozen large dorado, providing enough fishing stories for everyone to tell and retell for years to come.

On the final night of the May trip, the party was a raucous affair with plenty of gifts including a Charger jersey with the number 86 emblazoned on the back and a custom rod. Then friends, David and Elizabeth Copeland, presented Togo with a turban brought all the way from India, declaring him the “Sultan of Swing!”

DOTTIE B ll with flags flying at the dock
Posted by That Baja Guy at 6:38 PM 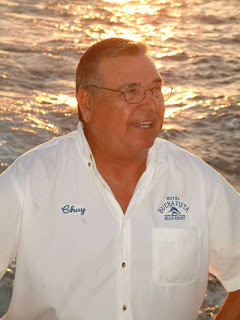 “Chuy” Valdez, owner of Hotel Buenavista Beach and Resort located in East Cape
When Pedro A. Sors García, President of the Federation Nacional de Pesca Deportiva http://www.pescaenmexico.com/, announced their support of Shark Norma (NOM 029) last year, which allowed Ramon Corral of Conapesca to state publicly that he has the sport fishing sector’s support, the organization thrust itself into the center of a MAJOR controversy.
Minerva Smith, owner of Minerva’s Baja Tackle in Cabo San Lucas and spokesperson for organizations opposed to NOM 029 stated, “Pedro Sors and Jesus “Chuy” Valdez, Vice President of the Federation, recently spoke to the Secretary of Tourism and the press, and claimed that they spoke on behalf of sport fishing in Mexico. But they do not speak for the thousands of sport fishing enthusiasts who support catch and release. Their membership seems to be limited to fresh water fishermen.”
During a recent interview “Chuy” Valdez, owner of Hotel Buenavista Beach and Resort located in East Cape, countered, “Our organization includes eighteen State Associations of Sport Fishing with approximately 11,327 individual members nationwide. Our State Associations with coastline are Baja California, Baja California Sur, Chiapas, Guerrero, Oaxaca, Quintana Roo, Tabasco, Tamaulipas, Sinaloa, Veracruz and Yucatán, and our State Associations with inshore waters are Chihuahua, Coahuila, Durango, Guanajuato, Hidalgo, Nuevo León and Puebla.”

He added, “It is also a member of the Confédération Internationale de la Pêche Sportive (CIPS), maximum representative world wide of sport fishing, the Federation Internationale de la Pêche Sportive – Mer (FIPS-M), the Federation Internationale de la Pêche Sportive–Eau Duce (FIPS-ed), and the Federation Internationale de la Pêche Sportive – Mouche (FIPS-Mouche). It is recognized by the Mexican Government’s Comisión Nacional de Cultura Física y Deporte (CONADE), the highest authority on sports in our country. The National Federation of Sport Fishing of México, represents the sport of fishing in ALL of its disciplines nationwide, not only in sea fishing of the Los Cabos area.”“Some of our accomplishments include the decentralization of the Sport-Recreational Fishing Licenses which were previously handled only by the government. They are now distributed by State Fishing Associations, thus reflecting in 2007 an increase of 140% in the sales of licenses with respect to 2006, and in collaboration with other organizations, we have contributed to the discontinuance of the Boat Permits for Sport Fishing Boats.” he continued.
“We have a legitimate interest in protecting not only billfish, but also the rest of the species reserved for sport fishing. We see the NOM 029 as a tool to stop the illegality with which billfish are caught. However, the Federation feels that there were important considerations left out when the law was written. The most important omission is an index (or percentage) of “by-catch”. Thus, the National Federation of Sport Fishing worked very hard so that the Governmental Agencies such as SAGARPA and CONAPESCA include this index in the law. Finally, after several letters were sent out to the authorities, an index of “by-catch” [10% for Sail Fish, 8% for Marlin (all sub-species), and 5% for Dorado] was accepted and included in the Nom. The Federation is still fighting to prevent the sale of the “by-catch”, requiring that it be donated to welfare institutions instead. Without the law, billfish can be commercialized as by- catch. Along with the catch of the sport fishing fleets, it is the only means of supply to the Mexican market.”
The following is a Comparison Table provided by the Federation:
WITHOUT NOM WITH NOM
Anyone can catch shark without restrictions at any distance from shore. limits the small boat shark fishermen to fish 10 miles or more shark
Shark fishermen have no restrictions on the equipment they may use the use of gill nets is prohibited and the type of long lines have to be setup to reduce the by catch to a minimum.
The fishermen can use live bait and hooks that encourage billfish by-catch, as well as monofilament leaders It is established that only dead bait can be used, and Japanese type hooks with wire leaders
The presence of on-board observers is not enforced The presence of on-board observers is enforced
There is no by-catch index for species reserved for sportfishing There is a by-catch index for species reserved for sportfishing

“Before NOM 029 the licenses issued for shark fishing allowed the incidental catch of billfish to be commercialized in Mexico. NOM 029, with its technical attachment on incidentally caught fish, will reduce drastically (over 90 % of billfish). This would be an achievement without precedent, and would result in a notable increase in conservationism,” Pedro A. Sors García added.
The Federation represents sportfishing throughout Mexico, not only the Sea of Cortez. It is NOT just a fresh water organization, and they believe that Shark Norma is merely a first step.
As Pedro A. Sors García summarized in a recent letter, “The Federation has never discredited any of the institutions that oppose the NOM 029 today, for we recognize their legitimate interest to protect the billfish species. We simply understand that these organizations have a different point of view from ours on how to help improve our fisheries’ management. We wish for these organizations to understand that our efforts are directed in the same direction, and that they would respect us in our struggle to reach the same goal.”
Both sides should recognize the importance of the preservation of the resource…how that is accomplished should not overshadow the goal!
Posted by That Baja Guy at 6:26 AM