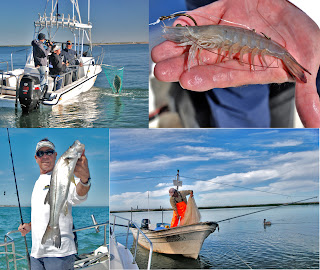 Always a challenge searching for the shrimp fishermen can cause some anxious moments until they are found.
Last year at the Fred Hall Show, Dennis Braid, owner of Braid Products and co-host of Trev Gowdy's Monster Fish, stopped me in an aisle and pulled a tattered piece of notepaper out of his pocket.
"You are on my list," he said as he pointed to my name with 'fish Mag Bay snook' scrawled behind it.
We had experienced a banner year for snook in 2009 and a quick check with Bob Hoyt, Mag Bay Outfitters in Lopez Mateos confirmed open dates in November of 2010 and the Monster Fish trip was added to the calendar.
After spending October in Cabo San Lucas where I covered three back-to-back marlin tournaments and the WON/Yamaha Los Cabos Tuna Jackpot, I met Braid, a native Australian, who is considered one of the pioneers of stand-up, big game fishing, and his cameraman Todd Free at the La Paz airport. During the three-plus hour drive to Lopez Mateos in the Roadtrek,  Dennis's enthusiastic questions were non-stop…covering everything from tackle to techniques.
Before sunup the following morning, the truck towing MBO's Mar Gato grumbled to a stop in front of Mag Bay Outfitter's rental. Dennis and his cameraman had already assembled a large pile of gear to be loaded on the 26' outboard-powered catamaran that we would be fishing on for the next week. Always smiling Captain Sergio Garcia helped pack their gear and we bounced along the dirt streets of Lopez to the concrete launch ramp a few blocks away.
In the water, we sped north in search of the pangas rigged with the telltale loge-pole outriggers that seasonally fish for shrimp (camarones) in November. Always a challenge, searching for the shrimp fishermen can cause some anxious moments until they are found. Only in the past few years have we began using live shrimp for bait in the esteros, and the success of this trip was dependent on the availability of the shrimp. Nearly every live bait is bit by something. Don't even waste your time with the dead ones; save those and eat them for dinner.
A quick inventory of tackle confirmed this wasn't one of my usual light-tackle or fly-rod trips where finesse provided the balance between angler and fish. This tackle was medium to heavy and loaded with fifty pound braid!  It would be game-on for the monsterfish we sought!
Loading up the bait tank with live shrimp, we continued farther to the north. The spot we chose  was a thirty-foot deep channel along the eastern shore of the mangrove-lined estero. The sounder confirmed the depth and an irregular bottom with two-foot ridges covered with sticks and debris. Using small one to two ounce sinkers, depending on the current, the live shrimp were dropped to the bottom and then raised up a couple of reel turns to avoid the debris.
It was as though the fish had been waiting for Dennis to arrive. The bite began with the first drop and continued throughout the day with a little ebb and flow. Every fish hooked demonstrated the strength developed in the tough neighborhood where they dwelled.
Oddly, while there were an unusual number of species caught, the star of show (the snook) didn't appear on stage as often as we had hoped for. The distinctive violent bite of the snook was few and far between.
A few days into our trip, a local pangero we had befriended provided the answer. Sipping one of our icy cervesa's, he volunteered that the divers speared all the snook in our spot two weeks ago. "Grandes," he said as he spread his hands more than four feet apart, signifying the size.
Digesting the disappointing news, A plan quickly evolved into plan B at our friend Elsa's Taco stand that night. Local knowledge provided  us with a laundry list of other snook-producing spots to visit.
For the final few days, we moved from spot to spot covering thirty miles of Magdalena Bay north and south of Lopez Mateos. We pounded the good spots that produced and moved on to the others if they didn't.
The strategy paid off and we caught the elusive snook…did we get the monster we needed to star in the show? Tune into Outdoor Channel and watch Monsterfish to find out.
http://www.outdoorchannel.com/Shows/MonsterFish.aspx
ShowTime's are:
Friday Feb. 18 Prime Time 7-11 pm
Saturday Feb 19 9:30 am
Sunday Feb 20 7:00 am
Posted by That Baja Guy at 6:08 AM 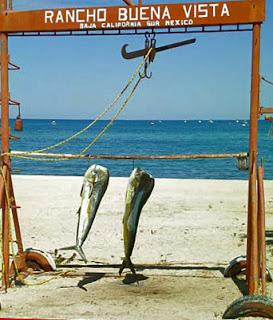 Rancho Buena Vista Closing January 25th
Six Decades later
When the email subject flashed on my screen Rancho Buena Vista Closing Celebration, I couldn't believe my eyes.
After surviving countless numbers of devastating Chubascos and other calamities, this historic hotel that literally put the East Cape area on the map was closing…in the end, it was taken down by the Tsunami of the economy.
In part,  the email notice read,
"Josh Martz, Russ Jones,  Christi Jones and the entire Rancho Buena Vista family
WHAT:  A closing celebration at the historic Rancho Buena Vista bar.
As many people may have heard, Rancho Buena Vista has peacefully gone to Baja’s Golden Age Resort in the Sky.  There are many reasons for shutting down the hotel, but it really boils down to whether or not we are able to give our customers the absolute best experience they deserve for their hard-earned travel dollars.  RBV has aged well, but we no longer foresee the ability to keep the hotel in good enough shape to offer that experience.  So, after six decades of operation, we no longer feel we can provide that experience."
I suspect that as the news gets out the thousands of guests who considered RBV their personal retreat and returned time after time over the years are feeling a twinge of age remembering their first visit to this unique piece of history.  I know I am.
I also suspect that many of the early principals, Herb Tansey and Joe García and WON columnist Ray Cannon and Sports Afield writer Chris Dufrense who wrote the early stories that drew attention to the hotel…those who were there for what was described as a "goat ranch" in the early fifties would be shaking their heads in disbelief that after all the hardships management endured over the years, their dreams could be destroyed so casually.
RBV has been part of our family's personal Baja history since the mid-seventies and honestly I need to step back and reflect a bit. Once I have, I promise there will more…soon
Gary Graham
January 25, 2011
Rancho Buena Vista Closing? Hold on just a sec… 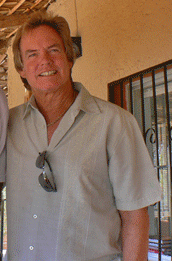 In an unusual email on Monday afternoon of this week, Seby R. 'Russ' Jones, President of Davidson and Jones Corporation of North Carolina, announced the permanent closing of Rancho Buena Vista Hotel in East Cape, adding yet another chapter to its colorful history.  The email invited one and all to celebrate the closing in the bar the following afternoon.
According to the email signed by Jones,  "RBV has aged well, but we no longer foresee the ability to keep the hotel in good enough shape to offer that experience.  So, after six decades of operation, it’s time to say goodbye."
Telephones rang, emails flew and many that heard the news shook their heads disbelievingly.
The shocked reaction was swift as the emails reverberating across the internet. East Cape locals and hotel owners expressed disappointment that the stately historic hotel would be no more.
Axel Valdez, Hotel Buena Vista Beach Resort, summed it up best. "It’s tragic for both the area and the hotel industry here."
Then early Tuesday afternoon a second email arrived from Mark Walters, one of the partners of Rancho Buena Vista Hotel and grandson, son, and third generation Baja entrepreneur.  Mark, paraphrasing Mark Twain, quoted, "The reports of RBV's closing are greatly exaggerated."
He continued, "The Davidson and Jones Corporation has been managing/operating the hotel for the past few years and they have decided to call it quits. The actual owners, the Hermosillo family and myself, are currently reviewing our options. The hotel will be closed only until another management company is located. Thanks for your interest."
So It seems for the moment the old girl has a reprieve. It appears that the whole incident was nothing more than a spat between owners and operators who resorted to the internet to negotiate a management position.
Next week's column will explore this story in more detail.
Posted by That Baja Guy at 9:58 AM