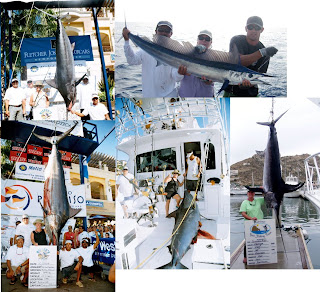 Martha Macnab, with five of the nine qualifying bills.


Martha Macnab, an outstanding angler, received official notification this week that she had qualified to become a member of one of International Game Fish Association's most prestigious clubs, the Royal Billfish Slam Club . The species required to become a member are Atlantic blue marlin, pacific blue marlin, Atlantic sail fish, pacific sail fish, white marlin, striped marlin, black marlin, swordfish and spearfish. Of the previous 89 members of the club who have managed to accomplish the catches, only six were women; Martha is now the seventh!

She literally traveled thousands of miles and fished two oceans to accomplish what many would consider an impossible feat…landing the nine (9) different species of billfish! Rebecca Wright, IGFA Records Coordinator, acknowledged receipt of the catches and assured Martha that she would be receiving a certificate attesting to her achievement shortly.

Martha, a friend and a resident of Buena Vista in Baja Sur, Mexico, began her journey many years ago with her first catch in the series, striped marlin. She has released well over 400 of them with her best single day's catch of 23 on the Finger Bank above Cabo San Lucas.

In 2007, she traveled all the way to Isla Mujeres to fish in one of the International Women Fishing Association’s Tournaments. Fishing on the yacht, Havin' a Ball, she landed several Atlantic sailfish.
Her white marlin was landed aboard her 58' boat, the Retriever, between Aruba and Cartagena, Columbia, on a voyage from Florida to the West Coast.

The Pacific sails she landed were in three different countries…Panama (Tropic Star), Guatemala (Fins 'N Feathers and Casa Viejo) and her home waters in Mexico. Her skipper in Guatemala was Mike Sheeder, younger brother of Captain Chris Sheeder, with whom she had fished in Midway Islands.
The waters off of Baja continued to live up to Martha's expectations as she landed a 645-pound black marlin on the Gordo Bank, and two more of the nine bills needed, a 530-pound Pacific blue marlin and a swordfish weighing in at a respectable 260 pounds near the Cabrillo Seamount. These were also taken aboard her own boat, the Retriever.

Ironically the smallest of the billfish is considered the rarest, and it was the most difficult for her to add to the list. Last year she travelled all the way to Kona, Hawaii, to catch a short billed spearfish (Tetrapturus angustirostiris). Locals call them 'Chuckers'. Six days on the water at the height of season produced six blue marlin and eight striped marlin, but disappointingly, Martha lost a 'Chucker' at the last moment right at the boat.

This year she returned to Hawaii to fish once again on the Northern Lights with Captain Kevin Nakamaru and crew Tracey Epstein. Hoping to get that 9th notch in her rod, she suffered five days through what could only be described as slow fishing. Until the last ten minutes of the trip, all that had occurred was a blue bite that broke off and one ahi (yellowfin tuna) which she caught!

Before the fat lady could sing, however, a pair of ‘Chuckers’ appeared in the wake and both struck the lures violently! Only one was hooked, but with that short-billed spearfish, Martha achieved the goal that had eluded her for a number of years!

Martha and her husband, Larry Warlaumont, who also maintain a home on Balboa Island, are well-known world-wide for their sport fishing exploits.
"I am pretty excited and proud to become the 90th member of IGFA's Royal Grand Slam Club and the seventh woman to achieve this goal and I am very thankful to Kevin Nakamaru and the other great Captains and crew members who found the fish." Martha Macnab.
Posted by That Baja Guy at 8:48 AM