Sũerte …a chance encounter and a catch 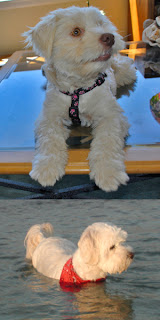 Sũerte  and Coci﻿
In the early nineties, I found a dirty, white terrier mix puppy, huddling under a rusted fender in Southeast San Diego, shivering from the January rain and soaked to the skin. Through an odd series of events, Coci became my constant companion, close friend and fishing partner as we explored the beaches of East Cape together.
Clients and friends marveled over Coci's fishing skills and he became the most photographed pup in East Cape. He eagerly paced the beaches by my side searching the water and when he spotted a fish, he retrieved it if he thought I was slow in bringing it in. If I got on the ATV with one still in the water, he cocked his head to one side and stood with his feet planted in the sand as though to tell me he was not getting on the ATV until the last fish had been caught.
When he died of old age, my heart was broken and our family was saddened by the loss of our seemingly irreplaceable family member, Coci.
One night this past August in Lopez Mateos a group of us went to one of our favorite taco stand. During the meal a small grubby, mostly-white dog with its tail wagging appeared. It was so covered in mud that I couldn't tell whether it was male or female. (Later I discovered she was female.)

Street dogs are common in Lopez Mateos and frankly, I rarely give them a second glance. However this one with her distinctive hazel colored eyes, long eyelashes and playful personality, wooed our group like a pro. Crawling on her belly, with her tail rapidly swinging back and forth, we couldn't help but take notice.
When questioned, my friend Elsa, owner of the taco stand, said the dog didn't seem to belong to anyone and visited the stand most nights. As we walked back to our rooms the discussion among our group was about how special the dog with the hazel eyes and friendly personality had seemed.

When I made my nightly call home to Yvonne, I described my encounter and how I had bonded with the pup. As we talked, we discussed the possibility of rescuing the dog and by breakfast the following morning, I had made the decision to adopt my dog. Since I had a long day of fishing ahead, I asked a friend to pick the dog up and take it to the local vet for shots and an examination.
The decision made, I expected to have a new pet when I returned. As luck would have it I caught my first snook of the season that day. Now I wouldn't say I was a superstitious fisherman, but I was confident that catching the snook that day was an omen. I decided to name my new pet, Sũerte ("luck" in Spanish); after all, I had caught the snook on the day I had decided to keep her.
My excitement grew throughout the day. I was eager to return and see my new dog. But the dog had not been at the Taco stand. My excitement faded to disappointment.
Over the next ten days the whole town joined in the search for the white dog with the hazel eyes. They wanted her to have a better life than wandering the streets of Lopez Mateos. It seemed like there were at least a hundred small, whitish dogs in town; they brought me 99 of them, but not Sũerte.

By the 10th day, I consoled myself by thinking that I had met a really cool dog that would remain timeless in my mind forever. I had to leave in two days, so time was not on my side.
Late that afternoon, Elsa sped into the compound where I was staying. She flew out of the car shouting excitedly, "I found her", and sure enough, there was Sũerte, curled up in a ball on the seat, frightened to death from what I am sure was her first ride in a car!

There were many more firsts for Sũerte in rapid succession…first bath (three the first day), first visit to the vet, puppy shots, dog food instead of foraging for meals, and sleeping inside. Two days later she endured a two-day 800+ mile trip to the border and finally crossed into the United States.
When we arrived in Lake Elsinore, I carried her from the van and set her down on the grass (another first…I don't know of any grass in Lopez Mateos). Maggie, Yvonne's 3-month old pup came racing across the yard, leaped on Sũerte's back like she was a pommel horse, and a friendship began that has continued to grow.

Sũerte provides many smiles every day. We have to stop and remind ourselves how many 'firsts' she is still handling, and it's remarkable how quickly she has learned. I am looking forward to her getting the hang of the fishing thing. I will bet it won't take long. I didn't name her Sũerte for nothing.
Posted by That Baja Guy at 5:01 AM